The decision marks the second victory in less than a month for the two cable and wireless firms, who agreed to a $20 billion deal nearly two years ago. In December, the country’s merger court, known as the Competition Tribunal, backed the transaction, dismissing a legal challenge from Competition Commissioner Matthew Boswell.

Days later, Boswell took his case to the Federal Court of Appeal. But a three-judge panel on Tuesday dismissed the appeal in a decision that was delivered less than six hours after the hearing began. The court did not even hear oral arguments from Rogers and Shaw.

Justice David Stratas of Canada’s Federal Court of Appeal “substantially agrees with the tribunal” as well as submissions from the companies. Rogers climbed 3.1 per cent to close at C$66.56 in Toronto. Shaw rose 2.8 per cent to $39.50 — one Canadian dollar less than the takeover price. 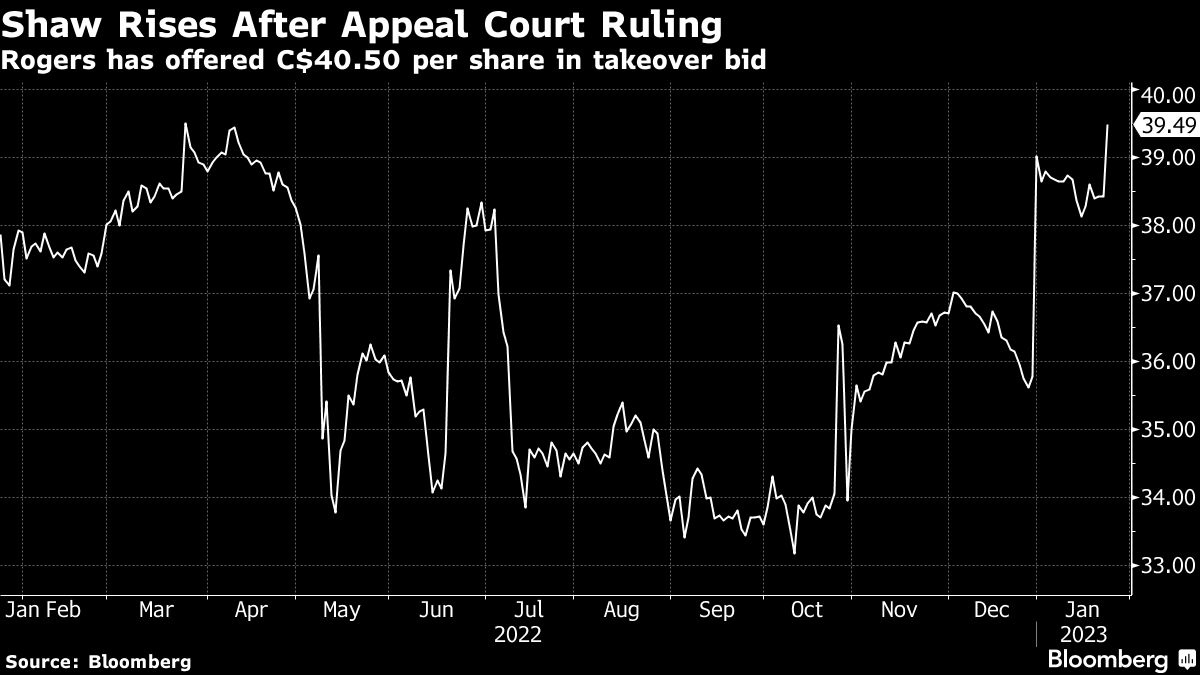 “The commissioner’s appeal was extremely weak. The commissioner was trying to appeal on a bunch highly technical arguments,” Michael Osborne of law firm Cozen O’Connor said in an interview on BNN Bloomberg Television.

Osborne said it was “pretty unlikely” that Boswell would be able to take the case to the Supreme Court of Canada. There’s still one step remaining — approval from Industry Minister Francois-Philippe Champagne, who gets the final say in the deal.

Champagne said on Twitter that he will make a decision “in due course.” But late last year, he laid out the conditions under which he would consider approval. Rogers and Shaw are trying to close the transaction by the end of this month.

My statement regarding the Federal Court of Appeal’s ruling on the Rogers-Shaw transaction: pic.twitter.com/ujvwznTVrl

“The industry minister, I think, is very likely to approve based on comments he made a month or two ago,” said Matthew Dolgin, an analyst at Morningstar. “It really appears it will get done.”

In June, in an attempt to resolve antitrust concerns, Rogers and Shaw cut a conditional deal to sell Shaw’s Freedom Mobile to Montreal-based Quebecor Inc., which sells cable and wireless service through its Vidéotron unit.

Boswell alleged that the tribunal had made legal errors, including failing to properly the assess competitive harms of letting Quebecor buy Freedom Mobile. Boswell argued that Freedom would be a weaker competitor under Quebecor’s ownership, and his lawyers have called the divestiture a “parasitic agreement” that relies heavily on commercial agreements between Quebecor and Rogers in order to work.

Last week, TekSavvy Solutions Inc. filed an application with the Canadian Radio-television & Telecommunications Commission to challenge the transaction, saying it “hinges on unduly preferential wholesale agreements between Rogers and Vidéotron.”

On Wednesday, the House of Commons industry committee will start a public hearing into the merger, a second review by the federal lawmakers. In March, the committee said the deal “should not proceed” but its recommendations are non-binding.