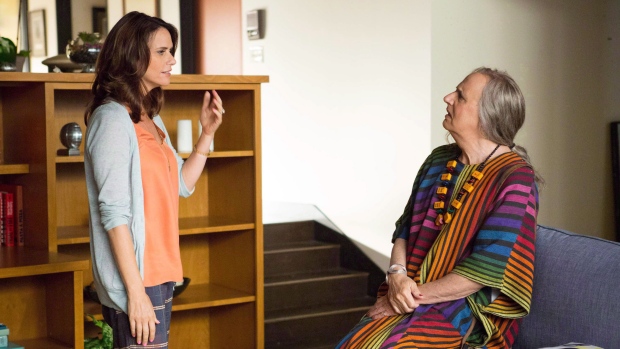 "Transparent," a show about a Los Angeles-based family with a transgender parent, was on Shomi, the streaming service launched last year by Rogers and Shaw. , THE CANADIAN PRESS/AP - Amazon Digital, Beth Dubber

Shomi announced Monday it was shutting down at the end of November, two years after the video-on-demand service launched amid hopes of thriving in a hyper-competitive market.

"The business climate and online video marketplace have changed markedly in the last few years," David Asch, senior vice-president and general manager for Shomi, said in a brief statement.

"Combined with the fact that the business is more challenging to operate than we expected, we've decided to wind down our operations."

In a followup email, the company said further information such as layoffs and how customers may be able to continue watching content exclusive to Shomi would be released in the coming days. It declined to share its subscriber numbers.

Rogers (RCIb.TO) and Shaw (SJRb.TO) launched Shomi in November 2014 in an effort to grab the attention of a growing number of people watching TV and movies online. At first, the service was only available to the companies' TV and Internet subscribers, but it was expanded to everyone in Canada in May 2015 as it tried to compete with Netflix and other similar web streaming services.

"We tried something new, and customers who used Shomi loved it," Melani Griffith, senior vice-president of content at Rogers, said in another statement.

"It's like a great cult favourite with a fantastic core audience that unfortunately just isn't big enough to be renewed for another season."

Ron Cenfetelli, an assistant professor at the University of British Columbia's Sauder School of Business, said the emergence of more streaming platforms over the last couple of years such as Amazon Prime, Hulu and CraveTV made it more difficult for Shomi to thrive.

"The challenge becomes competing in that market space where you're one among many," he said, adding that it didn't help that Shomi was limited to a national audience whereas Netflix, for instance, has a global viewership.

Another complicating factor for Shomi was an insatiable appetite from viewers for original content, Cenfetelli said.

"They didn't have the scale and therefore the revenue to counter the costs of the content," he said.

"It's sort of like a mom and pop shop competing against Walmart," he said. "Without that scale you're going to have a hard time competing."

Rogers said it expects to incur a loss on investment of approximately $100 million to $140 million in its third quarter, which ends Friday.

The investment Rogers and Shaw have made so far in Shomi, as well as ongoing operating losses, are not overly material for either company, said Drew McReynolds, an analyst with RBC Dominion Securities, in a note.

The shutdown could lead to a rise in subscriber growth for BCE's CraveTV and accelerate the timeline for that company to break even on its video streaming service, he said.