The federal antitrust commissioner failed to prove that the deal would cause significant harm to competition in the industry, the Competition Tribunal said in a summary of its ruling late Thursday. The merger of Rogers and Shaw is “not likely to result in materially higher prices” or a decline in service or innovation, the court found.

It’s a huge victory for the Canadian companies, concluding a seven-month legal process that has delayed their $20 billion (US$14.8 billion) transaction far past its original closing date of June. But it’s not a done deal yet. Competition Commissioner Matthew Boswell may try to appeal the ruling, and even if he doesn’t, the deal still requires the approval of Prime Minister Justin Trudeau’s government. 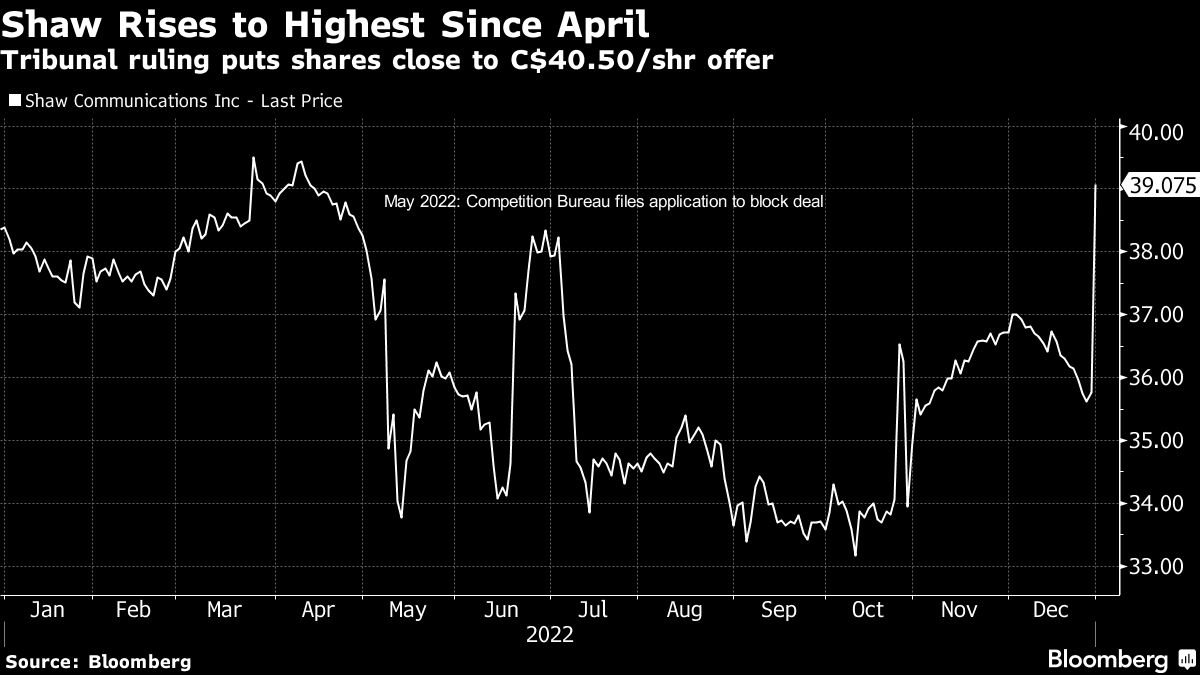 “I am very disappointed that the Tribunal is dismissing our application to block the merger between Rogers and Shaw. We are carefully considering our next steps,” Boswell said in a statement.

Industry Minister Francois-Philippe Champagne will review the tribunal’s ruling “in detail” before making a decision, spokeswoman Laurie Bouchard said by email. The tribunal hasn’t issued the full text of its decision yet, meaning the minister’s review won’t be completed until early 2023.

Rogers and Shaw said they welcomed the court’s statement and have extended their deal deadline to Jan. 31. The firms had been hoping to close by Dec. 31, which would have saved Rogers about $260 million that it will have to pay holders of its M&A bonds in January.

Rogers, Canada’s largest wireless company with more than 10 million phone customers, agreed to buy Shaw for $40.50 per share in March 2021 to bulk up its home internet and cable television businesses and add key network infrastructure in Western Canada. Post-acquisition, Rogers would have some $20 billion in annual revenue, the kind of scale the company says it needs to make 5G network investments and compete with rivals BCE Inc. and Telus Corp.

Toronto-based Rogers had also been hoping to extend its lead in wireless — its most lucrative line of business — through the acquisition of Shaw’s Freedom Mobile division. However, Champagne made it clear earlier this year that the government wouldn’t allow Rogers to take control of Shaw’s wireless licenses.

Then Boswell’s agency, the Competition Bureau, filed an application to block the deal on the grounds that it would hurt consumers by driving up consumer costs or reducing service. That forced Rogers and Shaw into action: In June they cut a conditional deal to sell Freedom Mobile to Montreal-based Quebecor Inc., which offers cable and wireless products to customers through its Videotron unit.

The latter transaction, worth $2.85 billion, will only happen if the larger Rogers-Shaw transaction is allowed to close. But it was key to the Rogers court victory.

“Videotron is an experienced market disrupter that has achieved substantial success in Quebec. It has drawn upon that experience to develop very detailed and fully costed plans for its entry into and expansion within the relevant markets in Alberta and British Columbia, as well as in Ontario,” the tribunal said Thursday. Quebecor rose nearly 5 per cent on Friday.

“It bears underscoring that there will continue to be four strong competitors in the wireless markets in Alberta and British Columbia,” the tribunal added. Rogers, Telus and BCE are major wireless providers in those two western Canadian provinces; Videotron would step into Shaw’s place as the fourth.

Champagne, who’s responsible for the Trudeau government’s telecommunications policy, appeared to signal his support for the deals by publicly setting out the conditions under which he’d sign off on Quebecor’s purchase of Freedom. Quebecor has already agreed to those conditions.

“Competition Tribunal decisions are often appealed successfully and there are big questions left unanswered in this summary decision,” said Keldon Bester, a fellow at the Center for International Governance Innovation and a former special adviser to Canada’s Competition Bureau. He said it’s “certainly possible” that Boswell will want to appeal it.

The Competition Bureau has 30 days to appeal and could ask for a stay of the court’s decision in the meantime, “but it’s not obvious that this would be granted,” National Bank of Canada analyst Adam Shine said in a note.