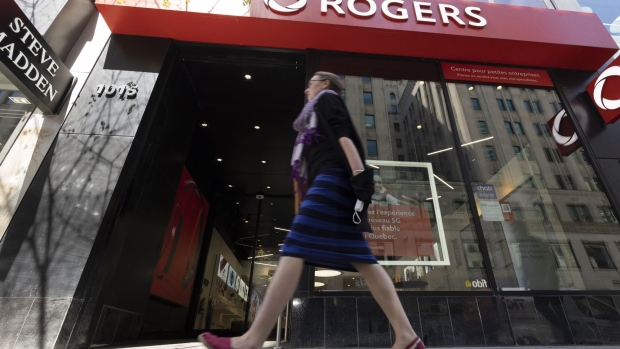 A Rogers store in Montreal, Quebec, Canada, on Monday, May 9, 2022. To close one of Canada's biggest-ever takeovers, Rogers Communications Inc. may need help from an unlikely ally: a rival telecommunications company, Quebecor Inc., led by an outspoken Quebec separatist with a penchant for lawsuits. Photographer: Christinne Muschi/Bloomberg , Bloomberg

Quebecor agreed to pay C$2.85 billion ($2.2 billion) for Shaw’s Freedom Mobile unit, the three companies said in a release Friday night. The deal is subject to approval by Canada’s antitrust body and the federal government.

The sale may be Rogers’ best hope of getting the green light for its proposed C$20 billion takeover of Shaw, one of the biggest deals in Canadian history. Over the past few months, Toronto-based Rogers has been in discussions with potential buyers for Freedom Mobile -- a move necessary to appease regulators and government officials who’ve made it clear they don’t want the country’s no. 1 wireless provider acquiring Freedom, the no. 4 player.

There have been a number of suitors including Xplornet Communications Inc., which is backed by New York-based investment firm Stonepeak Partners LP, and the Aquilini family of British Columbia, which has investments in a wide range of businesses from real estate to hospitality to Vancouver’s National Hockey League team.

But after those plans met resistance in Ottawa, Rogers executives came to believe that a deal with Quebecor gave them the best odds of winning the approval of regulators and the government.

“Our agreement with Quebecor to divest Freedom is a critical step towards completing our proposed merger with Shaw,” Rogers Chief Executive Officer Tony Staffieri said in a statement. “We strongly believe the divestiture will meet the Government of Canada’s objective of a strong and sustainable fourth wireless services provider.”

Montreal-based Quebecor is a formidable competitor in cable, telecommunications and media in Quebec, the second-largest Canadian province, and has 1.6 million wireless subscribers. Buying Freedom Mobile would extend its footprint to southern Ontario, Alberta and British Columbia and more than double its number of wireless customers.

In an auction last year, Quebecor spent C$830 million to acquire wireless spectrum licenses. Some of that spectrum is in Western Canada and could potentially be used to upgrade Freedom’s service, which isn’t a fifth-generation network.

“This is a turning point for the Canadian wireless market,” said Quebecor CEO Pierre Karl Péladeau said in a statement. “Quebecor’s Videotron subsidiary is the strong fourth player who, coupled with Freedom’s solid footprint in Ontario and Western Canada, can deliver concrete benefits for all Canadians. We have always believed that for there to be healthy competition in wireless services only a player with a proven track record can successfully enter the market.”

Even if the side deal is enough to win support from Canada’s Competition Bureau, Rogers’ acquisition of Shaw will still need official approval from Industry Minister Francois-Philippe Champagne.

(Updates with more information on the deal)