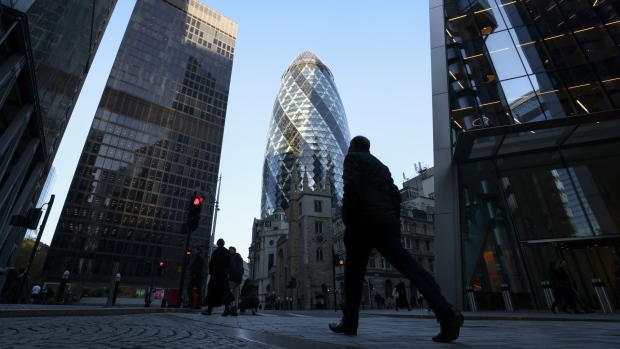 The skyscraper at 30 St. Mary Axe, also known at The Gherkin, in the City of London, UK, on Thursday, Dec. 8, 2022. The UK government is set to announce a package aimed at boosting growth in financial services and the City of London on Friday, according to people familiar with the plans. Photographer: Hollie Adams/Bloomberg , Bloomberg

(Bloomberg) -- Billionaire Chris Rokos is raising fresh capital as his macro hedge fund heads for a record year of gains.

Rokos Capital Management has held talks with potential clients to grow his assets by as much as $3 billion through both new money and existing backers reinvesting their gains, according to people with knowledge of the matter.

The investment firm, which already runs about $15.5 billion, is raising extra money because it’s required to post higher margin with counterparties due to the more volatile climate, the people said, asking not to be identified because the details are private.

A spokesman for the London-based investment firm declined to comment.

The macro trader is tapping a hot market for macro hedge funds, which have seen returns soar amid rising volatility and interest rate hikes this year. Rokos gained 45% in the year to November and produced more than $5 billion in profit, putting the fund on track for its best year since inception, one of the people said.

Peers such as Said Haidar and Michael Platt’s BlueCrest Capital Management have produced triple-digit returns, while Brevan Howard Asset Management’s main hedge fund is up by double digits. Macro hedge funds on average have gained almost 1.2% this year through November, outperforming most other fund types, according to data compiled by Bloomberg.

Investors in macro hedge funds have been taking profits out. They pulled $26 billion through October this year, more than five times the outflows in 2021, according to eVestment data.

Rokos Capital, which started in 2015 with initial backers including Blackstone Inc., has become one of the largest players in macro trading.

The fund has expanded its trading team and recently hired Luke Sadrian to establish a metals trading vertical. The firm has periodically raised new cash, gathering $1 billion in 2020 and pulling in a further $1 billion at the start of this year.