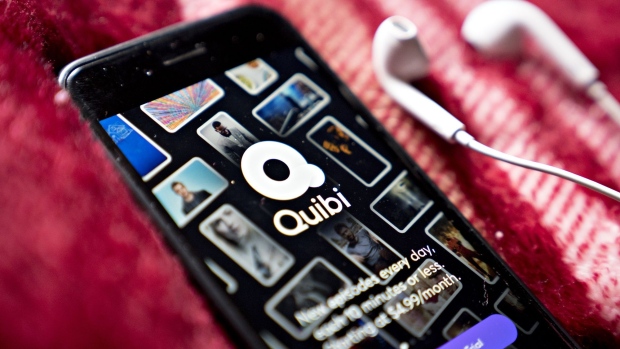 The Quibi short-form mobile video service application is displayed on a smartphone in an arranged photograph taken in Arlington, Virginia. , Bloomberg

Roku will offer more than 75 shows that Quibi created with Hollywood studios and producers on its Roku Channel, a free ad-supported streaming service. The news sent Roku shares up as much as 6.2 per cent to US$402.85 in New York trading Friday.

Launched more than three years ago, the Roku Channel has thousands of free movies and dozens of live channels and is among the most popular streaming apps on Roku, reaching about 62 million people.

Completing a transaction with Roku helps Katzenberg return a bit more of the US$1.75 billion that media giants, including Walt Disney Co. and AT&T Inc.’s WarnerMedia, invested in Quibi. Financial terms weren’t disclosed, but the Wall Street Journal reported that Roku paid less than US$100 million for the rights.

In October, Katzenberg and Quibi’s chief executive officer, former eBay Inc. CEO Meg Whitman, announced the company would shut down and return US$300 million in cash to shareholders, along with the proceeds of asset sales.

While Quibi struggled to gain traction by charging subscribers to watch its shows, Roku will make those shows available for free in the coming months. The deal with Roku also means those shows, which feature stars such as Kevin Hart and Anna Kendrick, will be watched on TVs instead of the phones that Katzenberg had imagined when he launched Quibi.

Quibi had seven-year licensing agreements for shows -- it never owned them, but instead agreed to pay to produce them in exchange for short-term licensing rights. Roku is stepping into those deals, said Rob Holmes, Roku’s vice president of programming.

“We’ve really seen the success of free,” Holmes said in an interview. Asked if Roku had greater ambitions in creating or acquiring more shows, he described the Quibi pact as a “unique opportunity.”

While Roku doesn’t make its own content, and primarily provides the technology for customers to watch other services, like Netflix Inc., it signs exclusive licenses for shows and movies for its Roku Channel. The Quibi acquisition could help Roku draw more viewers to that channel, which is a key part of the company’s effort to build a business selling ads on apps on its platform.

It’s not clear how popular the Quibi content will be -- the company failed because it couldn’t attract enough subscribers -- but some shows generated buzz online and were nominated for Emmy awards.

The sale is a win for Katzenberg, who had failed to drum up the interest of other deep-pocketed content buyers, such as Facebook Inc. There are other orders of business he must still attend to, including a lawsuit over a technology Quibi employed to allow users to watch shows both vertically and horizontally on their phones, but the deal means he’s mostly free to pursue new ventures.

Quibi aside, Katzenberg has a long history of success in Hollywood, having churned out hits for Walt Disney Studios in the 1990s and created DreamWorks Animation, which is now a unit of Comcast Corp.’s NBCUniversal.