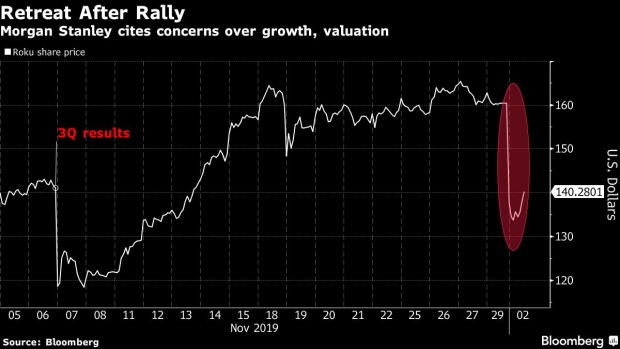 (Bloomberg) -- Roku Inc. slumped Monday after Morgan Stanley cut its rating on the stock and warned clients that revenue and gross profit growth may “slow meaningfully” next year.

Shares of the streaming-video platform fell as much as 17% in New York, their biggest decline since Nov. 7. The stock has soared more than 350% this year amid what Morgan Stanley analyst Benjamin Swinburne referred to as “exuberance over all things streaming.” He downgraded the stock to underweight from equal-weight, becoming just the third analyst with a sell-equivalent rating on the shares, among 18 tracked by Bloomberg.

With Roku’s valuation now exceeding both digital media players and even high-growth software-as-a-service companies, Swinburne sees the risk profile skewed to the downside. It will be “increasingly difficult to sustain the current premium,” especially as growth moderates, he said in a research note.