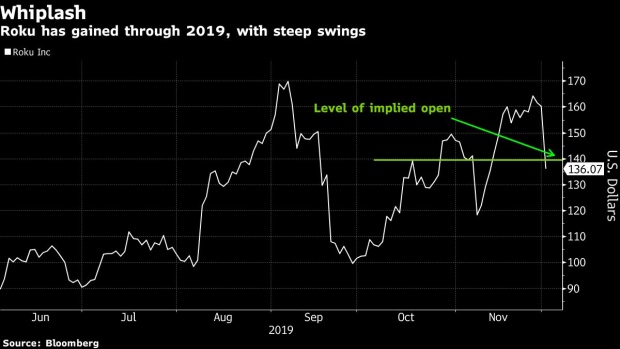 (Bloomberg) -- Roku Inc.’s price target was raised to a Street-high view of $200 from $150 at Needham, which called the company “a key beneficiary” of the shift toward streaming video.

The higher target comes just one day after Morgan Stanley downgraded the stock to the equivalent of a sell, warning about growth and valuation following steep 2019 gains. The downgrade sparked a 15% decline in Monday’s session, but Needham urged investors to “buy on dips.”

Shares of the company gained 2.8% in pre-market trading on Tuesday. While the stock has been a massive outperformer thus far this year -- having risen more than 340% through the close of trading on Monday -- recent moves have been volatile. It is up more than 36% from a September low, but down 17% from a peak hit last week.

The 2019 gains have been largely driven by the massive growth in the streaming-video space, which Roku has capitalized on by being a neutral platform for content companies. Needham, which reiterated its buy rating on the company, expects this trend to continue next year.

“In 2020, Roku’s key upside valuation driver will be accelerating subscription SVOD revenues, which lowers investment risk,” analyst Laura Martin wrote to clients, referring to streaming video on demand. She noted the growing competition in the streaming-video space; in addition to Netflix, Walt Disney and Apple, there are soon-to-be-released services from Comcast and AT&T.

To contact the editors responsible for this story: Catherine Larkin at clarkin4@bloomberg.net, Steven Fromm, Janet Freund