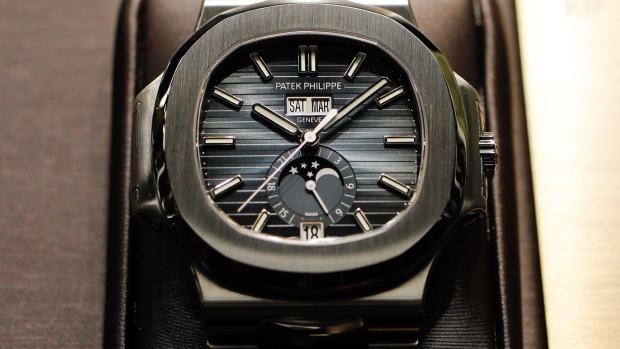 A 5726/1 Nautilus Annual Calendar luxury wristwatch, produced by Patek Philippe SA, stands on display during day two of the 2019 Baselworld luxury watch and jewellery fair in Basel, Switzerland, on Thursday, March 21, 2019. The organizers of Baselworld and the Geneva salon have decided to coordinate the schedules of next year’s shows, previously held several months apart, to accommodate visitors who otherwise would have to have to fly to Switzerland twice , Bloomberg

(Bloomberg) -- An unprecedented price surge for the most sought-after second-hand luxury watches is showing signs of settling down after some owners put their Rolex and Patek Philippe timepieces back on the block to cash out, a new index by trading platform Subdial shows.

“In certain models, there has been this big run-up, and they have come back down to a probably a more sensible price where the true underlying demand was,” Ross Crane, a Subdial co-founder and data scientist who helped create the index, said in an interview.

Still, the index, which includes Rolex Daytonas, Datejusts, and Submariners, as well as several Patek Philippe Nautilus references and one Audemars Piguet Royal Oak, is up about 32% in the past 12 months.

That puts pre-owned luxury watches ahead of a slew of other alternative asset investments, including vintage cars, gold, and certainly crypto currencies, which have suffered a steep decline in recent months. The S&P 500 is now poised for its worst first half since 1970, six years before Patek introduced its first Nautilus (which retailed for $3,100 at the time).

Interest in collectible vintage watches spiked during the pandemic as consumers, flush with cash but stuck at home, parked funds in timepieces they lusted over online. Some investors who earned big returns in tech stocks and crypto currencies looked to pre-owned watches as the next hot asset class.

Prices for some Rolex, Patek Philippe and Audemars Piguet references more than doubled as new buyers piled into a market previously populated by staid collector and hobbyist. After Patek ended production of the 5711 reference Nautilus, prices for its most popular model soared ever higher.

Now, with tech stocks and crypto values getting pummeled and interest rates on the rise, some speculators are selling their timepieces again.

The online watch seller and trading platform has also created watch price indexes tracking specific brands, such as Omega, Cartier, as well as Tudor, the more budget-minded sister brand to Rolex. The data show pre-owned Omega watches have lost about 3% in 30 days, while the index of selected Cartier watches up, and Tudor prices are down about 1%.