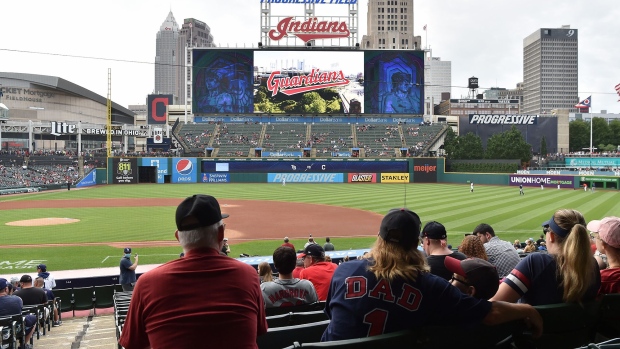 The Cleveland Indians show a video to fans announcing their name change to the Cleveland Guardians prior to the game against the Tampa Bay Rays at Progressive Field on July 23, 2021 in Cleveland, Ohio. , Photographer: Jason Miller/Getty Images

(Bloomberg) -- The Cleveland Indians baseball team is being sued by a local roller derby team over their planned name change.

Earlier this year, the baseball team said it would change its name to the Cleveland Guardians in response to complaints from Native American groups. The team said the switch was inspired by stone statues that flank a bridge in the city.

The Cleveland Guardians roller derby team is asking a federal judge to prevent the baseball team from taking the name.

“Major League Baseball would never let someone name their lacrosse team the ‘Chicago Cubs’ if the team was in Chicago, or their soccer team the ‘New York Yankees’ if that team was in New York,” Christopher Pardo, lead attorney for the roller derby team, said in a press release Wednesday.