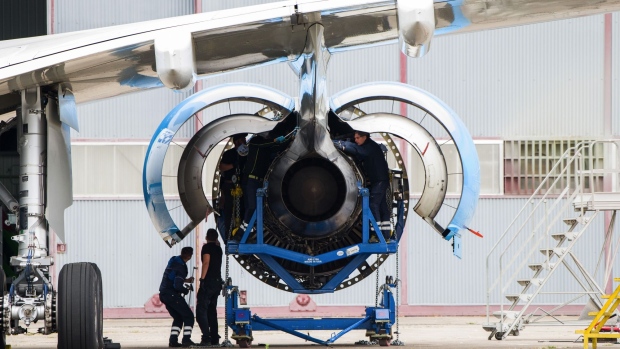 Workers carry out maintenance on a turbofan engine, manufactured by Rolls-Royce Holdings Plc, on a grounded passenger aircraft operated by Azul SA at Chateauroux airport in Chateauroux, France, on Thursday, Aug. 27, 2020. The single-runway airport located in France’s flat, central basin has turned away airlines seeking to store more planes -- a sign the global aviation slump is deeply set despite some easing of travel restrictions. Photographer: Nathan Laine/Bloomberg , Bloomberg

Rolls-Royce Holdings Plc is poised to unveil a plan to seek 2 billion pounds (US$2.58 billion) from shareholders after ending talks to bring in sovereign wealth funds as co-investors, Sky News reported.

Shareholders of the U.K. engine-maker opposed a plan to raise an added 500 million pounds from Singapore’s GIC and Kuwait Investment Office because it would dilute existing owners, Sky reported, without saying where it got the information.

Those talks have ended, and Rolls-Royce may announce the slimmed-down proposal as soon as Thursday, the TV outlet said. The financing would also include added borrowing, Sky said.

The company said this month it intends to raise as much as 2.5 billion pounds through a rights issue or other forms of equity, and also issue more debt.

Rolls on Wednesday declined further comment, referring to a Sept. 25 statement: “We continue to review all funding options to enhance balance sheet resilience and strength. No final decisions have been taken.”

Rolls-Royce has lost more than 80 per cent of its value this year, touching a fresh 17-year low on Wednesday amid a broad industry downturn triggered by the coronavirus pandemic.

The company has been particularly hard hit by the decline in long-distance travel, which has sharply curtailed demand for the wide-body planes its engines power. Many aircraft in the existing fleet have been temporarily or permanently grounded, depriving Rolls-Royce of vital maintenance revenue it collects when they fly.

Rolls-Royce has also seen its debt downgraded to junk this year, meaning borrowing would come at a higher cost than before the pandemic.

Sky News had earlier reported that Singapore’s GIC and Kuwait Investment Office were considering an investment.