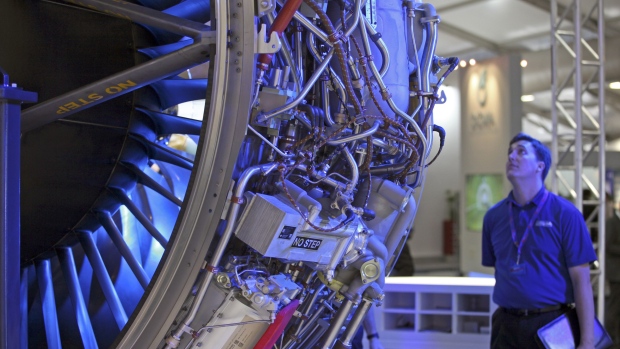 (Bloomberg Opinion) -- Few aerospace companies have been left unscarred by Covid-19, but those that were struggling even before the pandemic are experiencing a unique kind of hell.

Boeing Co. was already up against it after grounding its 737 Max jets and it’s expected to burn through as much as $16 billion of cash this year. Among suppliers, few were as vulnerable going into the crisis as Rolls-Royce Holdings Plc, the British jet engine manufacturer. It invested billions of pounds in several new engine designs, only to discover that one — the Trent 1000 — isn’t totally reliable. Fixing this will cost 2.4 billion pounds ($3 billion), and now the collapse in air travel has taken its own toll on Rolls-Royce’s finances.

On Thursday, a trading update laid bare just how devastating the virus has been for a company whose propulsion systems power 38% of the world’s wide-body passenger jets, including the Boeing 787 and Airbus A380. The group expects to consume about 4 billion pounds of cash this year. Like Boeing, Rolls-Royce’s liabilities now far exceed its balance-sheet assets.

Even in normal times the company loses more than 1 million pounds on each large jet engine it sells, and makes most of its commercial aviation revenue from maintenance contracts. When planes are grounded, precious little cash comes in to cover the company’s high fixed costs. The number of hours Rolls-Royce engines were in flight fell by 75% in the second quarter; they’re expected to more than halve this year.

With intercontinental flying likely to remain subdued, many of the twin-aisled jets that Rolls-Royce powers will remain underutilized. A strategic decision to focus on the wide-body aircraft market is coming back to haunt the company.

Bloomberg reported last week that Rolls-Royce was considering raising up to 2 billion pounds in equity capital. But, for now, it has announced only a new 2 billion-pound government-guaranteed loan.

A large capital increase would heavily dilute shareholders that don’t participate but Rolls-Royce has surely run out of other options, having already scrapped its dividend and announced 9,000 job cuts. The shares have declined by more than 60% this year, valuing the business at just 5.1 billion pounds. At its 2013 peak, Rolls-Royce was worth more than 4 times that.

The company still has 4.2 billion pounds of cash and 8.1 billion pounds of total available liquidity, a decent cushion considering the scale of the ongoing cash burn. But its finances are in a worse state than those numbers suggest, something Rolls-Royce’s complex accounting, large working capital swings and invoice-financing arrangements (since discontinued) helped paper over.

Rolls-Royce’s net indebtedness could rise to as much as 16.6 billion pounds, according to an estimate from JPMorgan analyst David Perry that preceded Thursday’s trading update. That’s when you include the cash that customers have advanced Rolls-Royce ahead of the maintenance work it must still carry out, as well as its operating leases, provisions for fixing faulty engines and other liabilities.

About half of Rolls-Royce’s revenue comes from making power-generation and defense equipment, businesses that haven’t been as badly affected by coronavirus. Power-generation sales fell but defense is holding steady. A group target to achieve 750 million pounds of free cash flow in 2022 gives investors something to cling to. Chief Executive Officer Warren East believes the company has an attractive and independent future.

And yet, Rolls-Royce will emerge from this crisis as a smaller group with less cash-flow potential and more debt. As a key military supplier to Britain and one of the country’s last truly world-class manufacturers, the government will be keeping a close eye on its financial health. The state had to rescue the company when it went bust in the early 1970s, and it still holds a so-called “golden share,” allowing it to block a foreign takeover.

Investors seem to think more state assistance will be forthcoming if needed.(2) The company’s 550 million euros of senior unsecured 1.625% coupon bonds, which mature in 2028, trade at 90 cents on the euro. That’s not great, but it’s not disastrous either. Standard & Poor’s has already cut the credit rating to junk. If Rolls-Royce does prove too fragile to stand alone, the idea of merging it with BAE Systems Plc could be revived. It’s too important to fail.

(1) So far Rolls-Royce has tapped 300 million pounds from the U.K.’s Covid Corporate Financing Facility and now has another 2 billion pound government-guaranteed loan available to it.