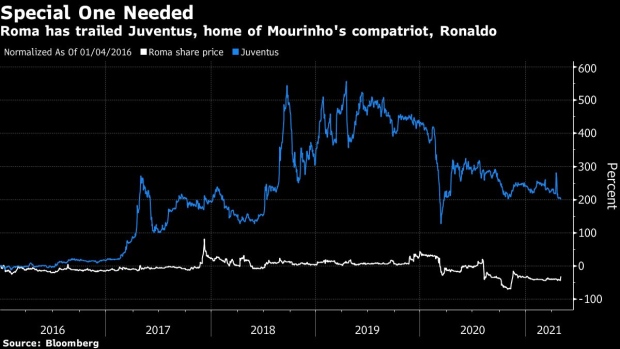 The surprise appointment comes just two weeks after the 58-year-old was fired from Tottenham Hotspur, with the club lying seventh in England’s Premier League. Mourinho joined Spurs in 2019, about a year after he was removed as manager of Manchester United following a disappointing run of results.

But, despite Mourinho’s less-than-stellar records at Tottenham and United, the appointment is still a coup for Roma, a team that hasn’t won Italy’s top league for two decades. The Portuguese is one of global soccer’s most recognized managers and has won the domestic title in four different European nations, including Italy.

Roma are currently seventh in Serie A, while Mourinho’s former team Inter Milan crowned champions this past weekend with four matches to spare. Mourinho left Italy in a blaze of glory in 2010, heading to Real Madrid after overseeing Inter’s first European Cup win in 45 years, alongside league title and domestic cup wins.

Mourinho has signed a three-year contract, Roma said in a statement.