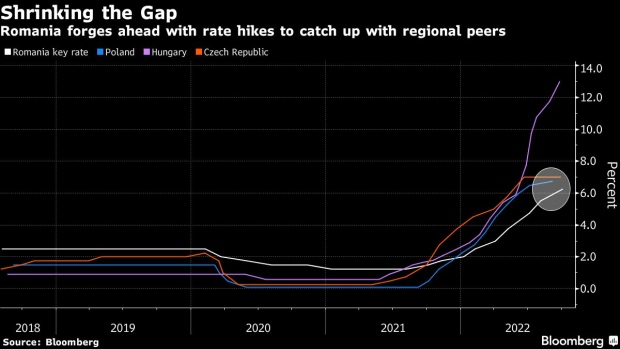 (Bloomberg) -- Romania unexpectedly pressed ahead with a robust pace of monetary tightening, raising borrowing costs to the highest level in over a decade to combat persistent inflation.

The central bank in Bucharest lifted its benchmark interest rate by 75 basis points to 6.25% on Wednesday, following a similar decision at its last meeting in August. Only five out of 15 economists in a Bloomberg survey predicted the move, while most analysts saw a step of 50 basis points; one predicted a 25 basis-point hike.

“According to current assessments, the annual inflation rate will probably stick to an upward path toward year-end, under the impact of supply-side shocks, yet at a visibly slower pace,” Banca Nationala a Romaniei said in a statement.

The leu extended its two-day winning streak against the euro, gaining 0.1% after the decision. It traded at 4.9375 per euro at 4:40 p.m. in Bucharest.

Rate setters opted for their ninth increase over the past year, though are still behind the pace of tightening of other central banks in the region, as they battle inflation that, at 15.3%, has reached the highest level in almost two decades. With price growth yet to peak given the geopolitical uncertainties triggered by Russia’s war in Ukraine, the central bank had to weigh the impact of tightening on the economy and the leu.

“The larger-than-expected rate hike suggests that the central bank wants to end the hiking cycle in line with the Czech peers, at 7%,” Dan Bucsa, a London-based economist at UniCredit said after the decision. “The bank expects inflation to increase further from here due to gas and electricity price caps applying to fewer households after a legislative tweak in August. It also expects food prices to rise further.”

In its latest inflation projection, the central bank expects prices to remain in double-digits until the second half of next year.

(Updates with leu in fourth paragraph, analyst comment in sixth)