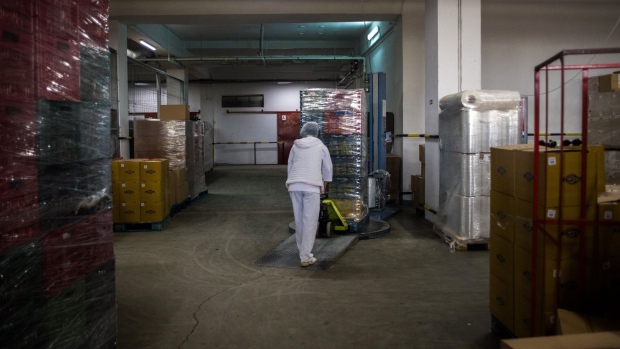 A worker moves crates of bread in a warehouse at the Dobrogea Group flour mill and bread factory in Constanta, Romania, on Wednesday, May 18, 2022. Wheat supplies remain under pressure globally, with unfavorable weather and protectionist measures adding to Ukraine's stymied exports as the country's Black Sea Ports remain blocked.. , Bloomberg

(Bloomberg) -- Thousands of Romanian companies are struggling to secure long-term power and gas contracts, with suppliers saying they can’t provide required volumes at competitive prices as government subsidies are inadequate and slow to arrive.

The country’s energy aid program -- which may be amended by parliament in the coming weeks -- compensates providers up to 1,300 lei ($253) a megawatt hour, which is less than half the current market price. That leaves suppliers facing losses if they accept new clients and have to buy power from the spot market.

“If you want to supply additional volumes of gas or electricity to customers you don’t already have, you need to be able to buy that energy,” Eric Stab, chief executive officer of Engie Romania SA, said in an interview in Bucharest last week. “At the moment we all have a big cash problem linked to the situation and the fact that we’re basically pre-financing all those support schemes.”

As European Union states strive to agree an unprecedented package of measures to help address the continent’s energy crisis at a ministerial meeting on Friday, Romania is still struggling to fine tune its aid plan. Lawmakers are debating whether to add further requirements to an already complex multi-billion dollar package, which was designed to help citizens cope with the highest inflation in decades.

Some providers are already on the verge of insolvency because of the liquidity issues, according to local media. Suppliers protest that the government is slow to disburse compensation funds, though the administration insists it pays the money as soon as it receives the invoices.

“It’s up to parliament now” to make any changes to the plan that it considers necessary, Energy Minister Virgil Popescu said in a text message.

Hidroelectrica SA, Romania’s largest hydro-power producer and a supplier to about 300,000 households and 2,500 companies, said it couldn’t accept most new contract requests from firms, with a summer drought also limiting its output. The company has received more than 200 supply requests every day from non-households this year, it said, declining to provide a number for those rejected.

Romania’s upper house of parliament this week approved changes to the aid package, including a new requirement that sets longer supply agreements. The decision-making lower house has yet to start a debate to formally endorse the government’s plan, which was put into place under an emergency powers in April.