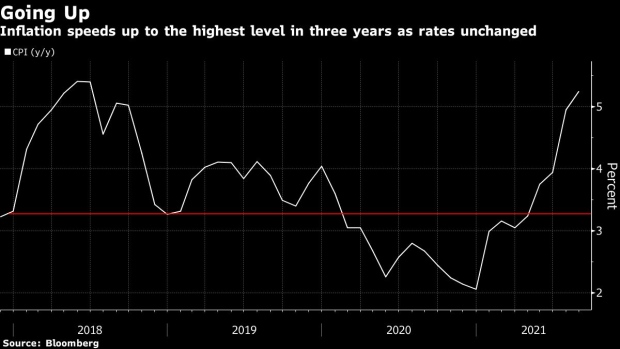 (Bloomberg) -- Romanian inflation accelerated to its fastest since 2018 as a political crisis sent the leu to a record low and complicated decision-making for the central bank.

Consumer-price growth quickened to 5.25% from a year earlier in August, compared with 5% in July, data released Friday showed. That’s above the 5.2% median estimate in a Bloomberg survey of 10 analysts. Inflation was up 0.2% from the previous month.

As higher energy tariffs trigger price increases across the board, the central bank has refrained from following Hungary and the Czech Republic in lifting borrowing costs, preferring instead to use money-market tools to curb liquidity.

While some board members still see the price shock as transitory, Governor Mugur Isarescu has said interest-rate hikes are in sight, but only at the right time. Romania, like other parts of eastern Europe, are bracing for a new wave of the pandemic.