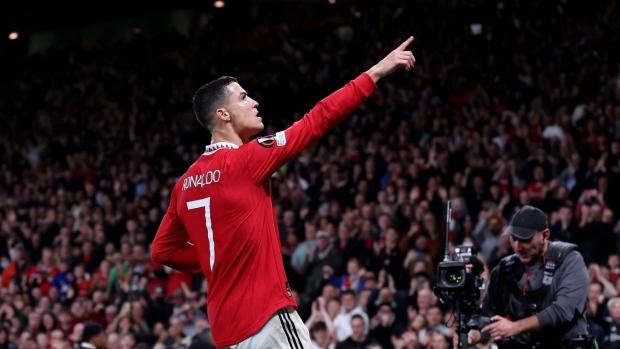 The only account with more followers is Meta Platforms Inc.-owned Instagram’s official page, a spokesperson for the social media website confirmed. Argentina’s Messi is the second-most-popular celebrity with 376 million followers, according to his account’s statistics. He’s closely followed by Kylie Jenner, with 372 million.

In the ad, Ronaldo and Messi, who are competing for their national teams at the World Cup in Qatar, lean on Louis Vuitton-branded trunks while playing chess. The Portuguese player posted the image, shot by photographer Annie Leibovitz, on Saturday.

The photo had gathered more than 36.8 million likes by Monday. The most-liked photo ever on the platform remains the post of the World Record Egg, with 55.9 million likes accumulated since 2019, a spokesperson for Instagram said, adding that the company only keeps data for the past three months.

In 2010, Leibovitz also photographed another generation of football players for the trunk maker. That ad featured Pele, Zinedine Zidane and the late Diego Maradona and was also launched ahead of that year’s World Cup.

A Louis Vuitton representative said it was the first time both players participated in an ad for the French brand, but declined to say how much each is making from this commercial.

In an Instagram post, Antoine Arnault, who heads image and communications at the luxury conglomerate LVMH Moet Hennessy Louis Vuitton SE said he was “really proud” of having helped bring about this campaign. He described the players as “two kings. Two idols.”

Since the World Cup started, Ronaldo, 37, has also posted ads for cryptocurrency exchange platform Binance and an anti-dandruff shampoo brand.