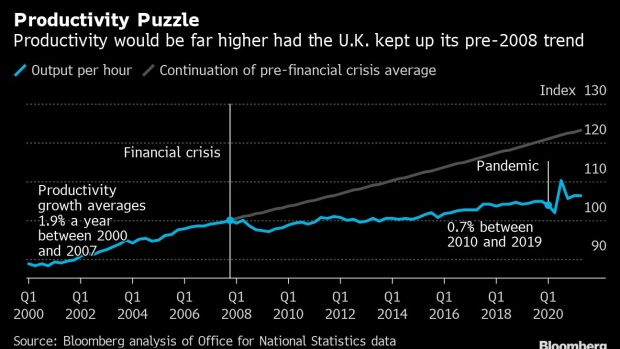 (Bloomberg) -- Chancellor of the Exchequer Jeremy Hunt will have less headroom for giveaways in his March budget because of chronic worker shortages and weak productivity have damaged the country economic growth potential.

The judgment has been made by the Office for Budget Responsibility, the independent fiscal watchdog, which will produce the growth forecasts alongside the budget. The figures will help determine how much the chancellor can spend against his self-imposed borrowing rules.

As a result, the Treasury will have less room for maneuver — making it harder for him to offer tax cuts or public-sector pay increases that would be popular with voters. The Times first reported the story, which was confirmed by two officials with knowledge of the report who asked not to be named.

Potential growth is a key OBR assumption shaping forecasts around the budget. The faster an economy can grow, the more taxes it will collect. The OBR’s Autumn Statement outlook was more optimistic than the Bank of England’s November forecast.

However, the OBR has since reviewed its judgment in light of persistently high workforce inactivity rates and ongoing weak productivity. The UK has roughly 250,000 fewer people working today than before the pandemic. It’s one of the things that means that Britain, uniquely among leading industrial nations, has yet to recover its pre-pandemic level of output.

In November, Hunt had close to £10 billion of headroom in for the 2027-28 fiscal year, when his rules bite. Positive developments in markets, including a lower profile for interest rates and gas prices will mean the immediate forecast for recession will not be as severe — but the long term picture has been downgraded.

“Such has been the turnaround in the outlook for the UK economy since the start of the year, we now think it’s touch and go whether there will be a recession in 2023. Our best guess is that there will be, but the downturn now looks likely to be very shallow. We still see an unimpressive recovery as the impact of tight monetary policy keeps growth well below trend into 2024.”

Potential growth is largely a combination of productivity and how quickly the workforce is expanding. Productivity, the rate of output per hour worked, averaged just 0.6% between 2010 and 2019. But the potential level for that figure ran at 2% thanks to high migration and more people choosing to work. Now, both those factors have reversed.

The pandemic, new visa rules under Brexit and persistent ill-health contributed to worker shortages. The BOE estimates potential growth is around 0.9%, while the OBR had roughly 1.5% in November. The OBR’s revised estimate is likely to be around 1.2%.