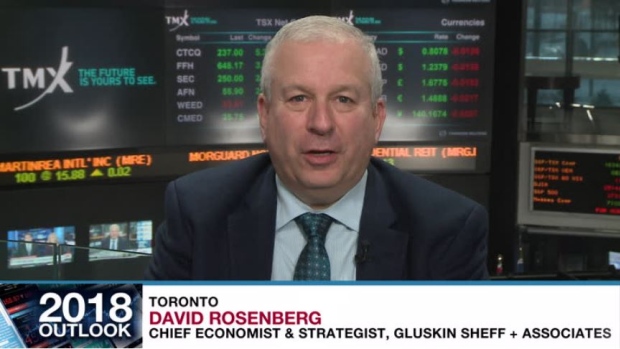 David Rosenberg has some questions about Canada’s December jobs numbers.

Statistics Canada reported on Friday that the country added 78,600 new positions in December and unemployment fell to its lowest level in 41 years, but the Gluskin Sheff + Associates Chief Economist has doubts about what the gains say about the health of the overall economy.

“At face value the number looks great, but just like the November number, there’s some question marks beneath the surface that has me thinking it’s overstating the degree of strength in the economy,” Rosenberg told BNN in an interview on Friday.

“It seems to be just a very highly skewed report,” Rosenberg added. “I think if I told [BNN] viewers that there was almost no job growth in Ontario last month, that the unemployment rate here — in the economic engine of the country — didn’t decline, but stayed at 5.5 per cent and that we actually had a modest contraction in manufacturing jobs, I don’t think people would be running and saying, ‘What a great number this was.’”

“It confirms what we already knew — that the Canadian labour market is extremely robust and on fire,” Rai told BNN.

“If you look at it on a 12-month basis through the end of December, this is the best year for job growth since 2002 — and I think that says something about our economy.”

Rosenberg raised concerns about uneven gains with some of the data, pointing to an imbalance of part-time to full-time jobs growth, a concentration of job gains in the service sector, and disproportionate job gains in different parts of the country.

Quebec and Alberta each added upwards of 26,000 jobs in December, combining for roughly two-thirds of the national gains.

“Alberta had its best number in many years. All of a sudden the Quebec unemployment rate has gone down to 4.9 per cent … We’re in a whole new world altogether when Quebec emerges as the nation’s paragon of fiscal and economic virtue, but that’s exactly what happened,” he said.

“If you believe this employment number, either the Canadian economy is absolutely booming in excess of three per cent, which we know it’s not from the spending data, or productivity is bearing the brunt and productivity is going down,” Rosenberg said.

“You can’t have it both ways.”