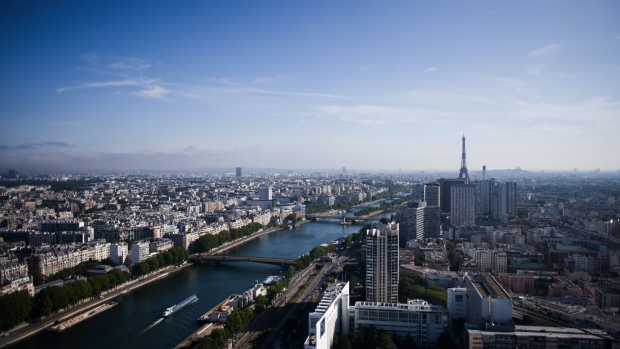 The Eiffel Tower monument and residential and commercial property stand on the banks of the River Seine as viewed from the Generali Baloon hot air research balloon during air quality checks in Paris, France, on Saturday, July 18, 2020. The French state was scolded by judges for failing to properly tackle air pollution and given a six-month ultimatum to clean up or face millions of euros in fines. Photographer: Nathan Laine/Bloomberg , Bloomberg

The Paris-based firm saw its overall revenue jump 61% to 1.35 billion euros ($1.6 billion), according to a statement Wednesday. Its global advisory unit, the biggest contributor to the firm’s performance, saw revenue surge 57% to 833 million euros, also a record high.

Revenue from advising on deals jumped 49% to 573 million euros, while revenue from restructuring, debt and equity advisory services surged 80% to 260 million euros, as companies sought help to repair their balance sheets following the effects of the pandemic.

“We are optimistic for the rest of the year,” Managing Partner Francois Perol said in a call with reporters “The pipeline of the investment bank is very good, extremely solid.”

The firm, which ranks third globally in terms of M&A deals number after Goldman Sachs Group Inc and JPMorgan, has tried in recent years to boost its presence in the U.S. The bank said Wednesday that it will hire more managing directors there, and has recently opened an office in Boston. The U.S. unit worked on three times more deals in the first half than in the same period a year ago.

In the first half, Rothschild advised on deals including Walmart Inc’s sale of Asda to the Issa Brothers and TDR Capital for £6.8 billion, as well as Vodafone Group Plc’s carve out of Vantage Towers for about 2.3 billion euros.

The bank’s wealth and asset management revenue rose 9% to 274 million euros due to equity market gains in the first half. The unit’s assets under management, at 87.5 billion euros as of June 30, 2021, were up 23% from a year earlier.

The bank said it would distribute an exceptional interim dividend in October this year of 1.04 euros per share to compensate for dividends not paid during the pandemic restrictions. A 12-month, 70-million-euro share buyback program will be launched subject to regulatory approval.