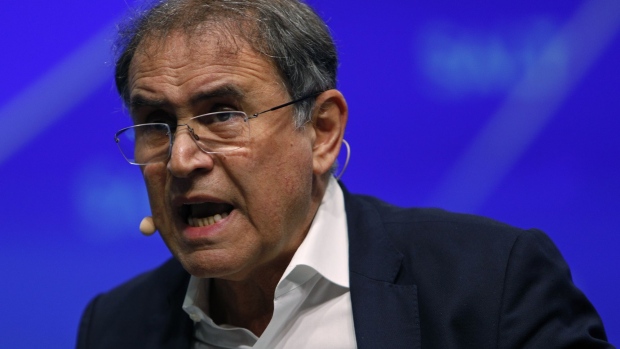 (Bloomberg) -- Nouriel Roubini -- renowned for foreseeing the mortgage collapse that helped produce the 2008 financial crisis -- said the post-pandemic world seems to be heading toward a repeat.

“My concern is that we are in a debt trap,” Roubini, chairman and chief executive officer of Roubini Macro Associates, said in an exclusive interview on Bloomberg TV at the Greenwich Economic Forum in Connecticut.  “When central banks are going to want to essentially phase out unconventional monetary policy, given the debt ratios, there is the risk of a crash in the bond market, in the credit market, in the stock market, in the economy and therefore they’ll be in that debt trap and unable to normalize policy rates.”

When the Covid-19 pandemic started to strangle the global economy, easy monetary policies and stimulative fiscal policies were seen as necessary to “backstop the financial system,” Roubini said. But the results have been extreme.

“We are in a debt super cycle,” he said. “And eventually, central banks are in a trap. People said they are going to normalize policy rates, but with these levels of private and public debt, if they were trying to do that, there will be a market crash, an economic crash, and therefore, I think the path of least resistance is going to be to wipe out the real value of nominal debt at fixed-interest rates with higher inflation.”

Over time and inevitably, he sees higher rates and slower growth, with the potential for stagflation.Such a dire scenario is why Roubini is sometimes known as Dr. Doom. He offered a different name.