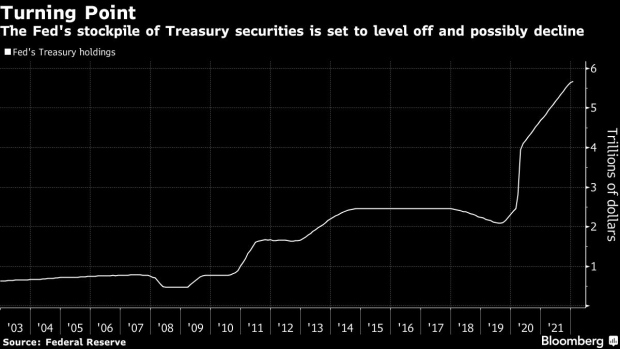 (Bloomberg) -- The Treasury market is facing a patch of supply-related cross-currents that may complicate the path for yields as they move higher.

That course will get backing from the latest reduction in U.S. government bond purchases by the Federal Reserve, which will buy just $40 billion of the Treasuries over the next month, half the amount they once gobbled up. For the first time since the most recent program of so-called quantitative easing began in March 2020, they’ll no longer occur daily. At the same time dealers will be busy estimating just how much the Treasury department will trim the size of its auctions when it announces its quarterly plans for sales.

Yields on U.S. debt maturing in the coming decade have climbed in the past two weeks back up to levels seen before the pandemic roiled global markets in early 2020, with the rate on the benchmark 10-year note climbing more than 25 basis points this year. The shift reflects mounting expectations that the Fed will raise overnight interest rates at least three times this year, if not four, and also that it will eventually stop replacing the Treasuries it holds when they mature. A decision on that may not come before March, however, when the programing adding new assets to the balance sheet is slated to end.

Increasing the pace at which the Fed dials back its bond buying “is akin to loosening the nuts on the training wheels and the bike will be a little more wobbly for the market to ride,” said William O’Donnell, strategist at Citi. “In March the training wheels come off. The question is how much of the Fed buying less Treasuries is already priced in by the market given the rise in yields we have seen so far this year.”

The Fed’s latest tapered purchase schedule includes 10 operations from Jan. 18 to Feb. 10. Previous monthly schedules have had 18 operations, typically one each trading day.

The purchases, which have added $3.12 trillion of Treasuries to the Fed’s stockpile since March 2020, have left a massive footprint. Initially undertaken to restore liquidity -- which briefly vanished as the onset of the pandemic led to wholesale dumping of financial assets -- the purchases continued as a way to further support the U.S. economy after the Fed’s policy rate had been cut to around zero.

While all of the purchases are done according to a pre-announced schedule, its decisions about how to allocate its purchases across the maturity spectrum have been market-moving on multiple occasions. The prospect of less buying by the Fed leaves Treasury dealers more completely at the mercy of investors.

“On balance we can expect more volatile coupon auctions as there will effectively be more supply for the market to buy,” O’Donnell said.

The 10-year yield ended Friday at 1.78%, notching its fourth straight weekly increase. Treasuries have lost 1.8% so far this year, on top of a 2.3% loss last year, the first annual decline since 2013, based on the Bloomberg Treasury Index.

Strategists at Morgan Stanley forecast the 10-year Treasury yield will rise to 2.2% in the second quarter and end the year at 2.3%. They predict the Fed will raise rates 25 basis points each quarter. Money-market traders, who as recently as June expected the Fed to keep rates unchanged through the end of this year, now assign nearly 100% odds to hikes beginning in March. While Fed officials on average in December forecast three rate increases this year, several this month have said a March hike is needed to combat the hottest inflation in a generation.

Meanwhile, the Treasury Department, which reduced the size of coupon-bearing dsebt auctions in November for the first time in five years to bring them in line with lower-than-anticipated government expenses, is expected to do so again in February, regardless of the Fed’s plans. But on Friday, its quarterly survey of primary dealers asked for their views on how a decision by the Fed to allow its holdings to run off might affect “financing needs and issuance decisions.”

“As we move through this year we will in all likelihood, we don’t know the future but if things develop as expected, we’ll be normalizing policy,” Fed Chairman Jerome Powell told the Senate Banking Committee Tuesday under questioning at his confirmation hearing for a second term as central bank chief. “Meaning we are going to end our asset purchases in March, we’ll be raising rates over the course of the year, and at some point -- perhaps later this year -- we’ll start to allow the balance sheet run off.”

The Fed’s next two-day meeting will wrap on Jan. 26. While interest-rate strategists expect a decision on balance-sheet runoff no sooner than June, messaging may start sooner.

“Investors are debating what the Fed will tell us at the end of the month,”said Matthew Hornbach, global head of macro strategy at Morgan Stanley. “Most investors looking at Treasuries will err on the side of caution until after the January Fed meeting.”