Whatever caused the tech selloff, and inflation angst looks to be the likeliest culprit, evidence has been gathering for weeks that traders were bracing for declines.

Short interest in the Nasdaq 100 exchange-traded fund, in free fall as recently as March, was surging before the index had its biggest plunge since March. Flows to the ETF were negative in April and would’ve been this month, too, if not for a jump on Friday. All told, about half a billion dollars has been drained from the QQQs this year.

As the Nasdaq 100 -- trading at more than 5 times annual revenue -- dropped more than 2.5 per cent, volatility in tech stocks jumped by the most since early March. With inflation expectations leaping to the highest level since 2006, everything from the biggest megacap tech stocks to the frothiest small fry was slammed.

“Inflationary pressures are becoming harder to ignore,” said Adam Phillips, managing director of portfolio strategy at EP Wealth Advisors. “Although the jury is still out on whether this is merely a temporary issue, the prospect of inflation is leading investors to seek out areas that are better insulated from the threat of rising prices.”

The breadth of the tech plunge made Monday particularly painful for bulls. Cathie Wood’s ARK Innovation ETF (ticker ARKK) sank 5.2 per cent to the lowest since November as its biggest holdings nosedived, with the likes of Tesla Inc., Roku Inc. and Teladoc Health Inc. skidding. After an eye-watering 150 per cent gain in 2020, ARKK has dropped 16 per cent so far this year.

But damage t wasn’t limited to tech’s speculative fringe. The New York Stock Exchange FANG Index fell 3.6 per cent, putting the gauge on track for its worst month since March 2020. With inflation threatening to break higher, the cohort’s expensive valuations are growing increasingly harder to justify. Alphabet shares are trading at eight times revenue, the highest in more than a decade, according to data compiled by Bloomberg, while Facebook’s price-to-sales multiple is nine -- nearly twice that of the average Nasdaq 100 company.

Bears boosted bets against tech stocks as the industry’s leadership faltered amid a flight to the reflation trade. Short interest on the biggest ETF tracking the Nasdaq 100, or QQQ, increased to 3.6 per cent of the stock outstanding, the highest level since August and up from 0.9 per cent in December. The spike in bearish wagers stood out in a market where shorts have collapsed amid the S&P 500’s 88 per cent rally since the pandemic trough in March 2020. 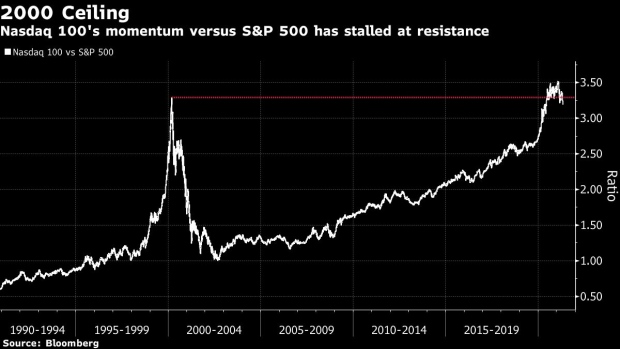 Meanwhile, after several years of one-way flows, investors are starting to pull cash from the US$161 billion Invesco QQQ Trust Series 1 ETF. The fund has bled roughly US$425 million so far in 2021, after absorbing nearly US$17 billion in 2020 -- the second-biggest haul on record. The ETF is on track for its first yearly outflow since 2016.

Charts on the Nasdaq 100 look precarious. In the short term, the gauge is approaching its average price over the 100 days, a trend line that sits within 0.1 per cent of the index’s current level and has served as support during the selloff in last November and again in March. A sustained breakdown in late 2018 and March 2020 foreshadowed losses that exceeded 20 per cent from peak to trough.

Viewed from a wider lens, the picture is no better. Plot the Nasdaq’s relative altitude versus the S&P 500 shows the ratio has fallen back below its 2000 peak again. Its failure in March to hold above that resistance was flagged by DoubleLine Capital LP founder Jeffrey Gundlach as a sign that another collapse may be in store.

While none of the data shows significant jumps in bearish sentiment, it’s consistent with a backdrop in which the extreme bullishness that has marked the last 14 months shows signs of subsiding. That may make sense after the index’s 92 per cent gain since its pandemic low.

The largest companies, loosely known as Faamg, last September saw day traders flocking to bullish options for quick profits. That demand has since waned, with their combined call open interest falling almost a third from the peak, data compiled by Bloomberg show.