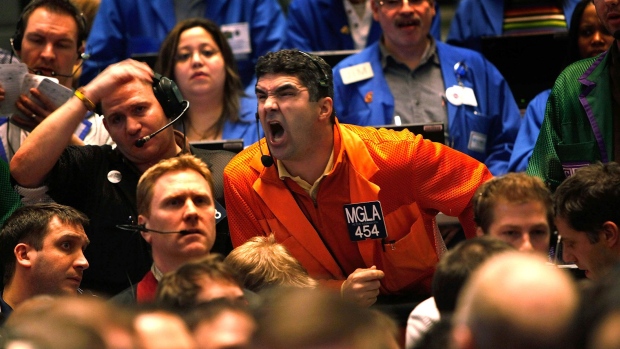 Pete Kosanovich can’t wait to put his trading jacket back on and return to the noisy Chicago pit where he’s worked for 17 years. The burly former football player is known on the floor by the letters “MGLA” printed on his badge, a nickname referencing the 1960s cartoon “Magilla Gorilla.”

Yet this is a nightmare environment when it comes to an illness as contagious as the coronavirus: Sweaty traders crammed closely together, gesturing wildly, and screaming above the ruckus. But brokers at CME Group Inc.’s pit trading eurodollar options -- the biggest of the handful of products that have avoided conversion to fully electronic trading -- feel certain they’ll be back. They say they deliver better results for clients than any algorithm when it comes to complex derivatives trades.

Kosanovich, a 48-year-old CME member, keeps an ear out on the neighboring Treasury options pit for clues about market action, likening it to how professional golfers know a tournament is heating up when they hear the crowd erupt on a different hole.

“When it gets busy, there is still a buzz, you can feel things happening,” said Kosanovich, who played fullback at Purdue University. “When you hear stuff happen in other pits, it’s a lot like being at Augusta and hearing the ‘Tiger roar.’ If you hear something happen in Treasury options, you can get ready for something to happen in eurodollar options.”

As he and his colleagues anxiously await word from CME Group about when the pit will reopen, their competitors in the electronic world are attempting to seize on a rare opportunity to win investors over to their programs and force these traders to hang up their jackets for good.

The abrupt closing of the floor on March 13 -- mirrored by operators of other floor trading operations including NYSE parent Intercontinental Exchange Inc. and Cboe Global Markets Inc. -- forced anyone who wanted to trade eurodollar options to do it electronically. The New York Stock Exchange partially re-opened its floor this week, though only about 25 per cent of the workers are scheduled to return. Meanwhile, Cboe Global Markets Inc. said it will reopen the Cboe Options Exchange trading floor in Chicago on June 8.

Advocates for electronic trading say the eurodollar options floor is an anachronism that’s endured mainly through the sheer will of those involved -- who benefit financially -- and the broader market is better off without it.

“This is the opportunity to not look back but move forward as an industry,” said Christian Hauff, CEO of Quantitative Brokers, which sells trading algorithms for global futures and interest-rate markets. Last month his firm rolled out its first options algorithm, initially for puts and calls on Treasury futures, with a plan to expand to eurodollars this year.

Not so fast, say the workers in the pits.

Open-outcry trading of eurodollar options -- in which market-makers in the pit provide prices for brokers -- survives because of the nature of the product, according to those involved.

Eurodollar futures were created in 1981 as a way to trade the expected interest rates paid on U.S. dollar deposits held in overseas banks. They were the first cash-settled futures, as opposed to contracts that involve delivery of an underlying asset such as oil or corn.

Even as Libor, the underlying interest rate, has been marked for retirement by global regulators, they remained the world’s most-traded interest-rate derivative as of last year, according to the Futures Industry Association, with average daily volume of about 2.7 million contracts in 2019. Options on eurodollar futures ranked fifth among interest rates derivatives.

The trades sent to the pit have names like butterflies and straddles and typically involve multiple contracts linked to the quarterly eurodollar futures that mature as far out as 10 years. They often involve selling one or more options contract to finance the purchase of others.

Because of the sheer number of possible combinations when every underlying futures contract, expiration month and strike price is taken into account, human market-makers shouting and flashing hand signals can work faster and at lower cost than robots, according to the humans.

Kosanovich once brokered a trade that involved 16 legs, but he has seen as many as 24 legs quoted in one package price.

“It seems like it should be easy to trade these complicated multi-legged strategies, but it’s just not,” he says. Brokers’ “fiduciary responsibility as members is to get the best price for the end user,” he says.

Prior to March 13, the action in the eurodollar options pit justified its survival, according to CME’s own standard that at least 30 per cent of average daily volume must be handled on a trading floor in order for the company to continue supporting an open-outcry pit. About half of the volume was handled in the pit before the shutdown.

Reopening the floor, however, will be tricky. The potential for social distancing is so impossible, it’s almost laughable.

That puts the CME Group in a tough spot. Executives at the exchange operator reiterated Wednesday that the reopening decision will be made in consultation with government and health officials. Market makers and floor brokers who want to return would do so at their own risk and have to sign a waiver, they were told this month.

When CME Group reported quarterly results in April, Chief Executive Officer Terry Duffy was asked by UBS analyst Alex Kramm whether the transition to fully electronic transactions had revealed floor trading to be unnecessary, allowing the company to save money by not restarting it. Duffy said the company intended to adhere to the 2000 guidelines requiring at least 30 per cent of volume be handled on the floor to keep it going. He estimated the annual cost of operating the floors at US$20 million, calling it “not extraordinary.” CME group earned US$2.2 billion in 2019.

Friends of the floor fear -- and its computerized rivals hope -- that by the time it reopens, customers will have finally adapted to the new world, as they have in other markets that no longer rely on open outcry to make prices. And every day that the pit remains closed threatens to erode the market share it commands when it reopens. Even Kosanovich and many of his comrades have been handling client trades electronically themselves lately.

“Nobody was prepared to go to 100 per cent electronic, but the market did it with no problem whatsoever,” said Thomas Fitch, founder and CEO of RVAssets, which has supplied trading algorithms for eurodollar and Treasury options on the CME since 2014.

He disputes the assertions from floor traders that they provide tighter spreads. The two months in which eurodollar options trading has been wholly electronic allow for a near-complete analysis of more than 90 per cent of trade data, Fitch said, and it reveals an average bid-ask spread of 0.26 cent. The average for floor trading is impossible to measure, but was probably 0.30-0.40 cent, he estimates. And traders at the exchange form “an opaque layer of brokerage” that’s able to gather information about flow that a screen doesn’t convey, he said.

“These factors can be used by the market maker to his advantage, and he is willing to pay around 50 cents a lot for this to the floor,” he said.

The closing of the pits has driven adoption of electronic innovations in development for years and investors “can trade any strategy today as easily as they could prior to closure of floor,” Sean Tully, CME’s global head of financial products, said on the company’s earnings call.

Stakeholders in open-outcry dispute that statement. Since the floor closed, illiquidity is particularly acute in weekly options on Treasuries and eurodollars and in long-dated eurodollar structures, said Matthew Carinato, chief operating officer of Trean Group LLC. Carinato said it was likely that some of the options business that used to go to the floor had migrated away from CME’s listed products to the decentralized swaps market.

Complicating matters is the upheaval in U.S. interest rates brought about by the Federal Reserve and other central banks to combat the economic fallout from coronavirus containment measures.

Libor is influenced by the Fed’s main policy rate, which was slashed to a range of 0 per cent-0.25 per cent in March. Forecasters expect it to remain there, possibly for years. That’s unfavorable to traders of a product used to wager on changes. Open interest in both Treasury and eurodollar futures has tumbled since February.

“Under normal conditions, I would expect that most end-users would want the pit back,” Chicago-based futures and options broker Albert Marquez said. “It’s far more efficient and markets are tighter. That being said, it’s not exactly the best time for eurodollar options with rates where they are.”

Regardless, Kosanovich -- aka Magilla -- is itching to return to the last bastion of human price discovery, where age-old rules still apply.

“Your word is your bond,” he says. “That is still true in our pit.”