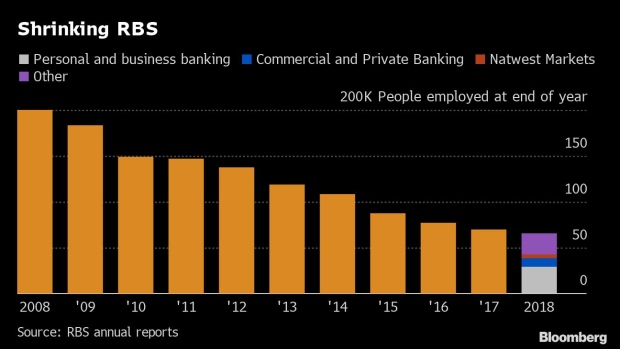 Royal Bank of Scotland Group Plc’s new boss Alison Rose is abandoning the bank’s three-centuries-old name and slashing its markets business as the state-controlled lender steps away from its tumultuous past.

RBS, which will be renamed NatWest Group Plc, is almost halving the assets in NatWest Markets, which houses its investment bank. Rose, the first female chief of a major British lender, is also embarking on further cost-cutting in her first set of earnings since replacing Ross McEwan last September.

“Our performance doesn’t yet match the potential that exists in this bank,” Rose said in a statement Friday. “We can deliver so much more.”

The firm, which is still recovering from one of the costliest bailouts of the financial crisis over a decade ago, will also incur costs of as much as 1 billion pounds ($1.3 billion) as it cuts expenses in the face of “challenging market conditions.”

RBS also softened a key measure of profitability, targeting returns of 9% to 11% for the longer term, having previously dropped its 12% return on tangible equity target for 2020, blaming low growth while Brexit is unsettled.

For the fourth quarter, RBS beat consensus estimates with an operating profit before tax of 1.55 billion pounds.

Natwest Markets’s risk-weighted assets will almost half in size to about 20 billion pounds, the firm said. The unit accounts for 4,500 of the group’s 65,400 staff, according to 2018 company filings.

Under McEwan, the bank went through a multi billion-pound restructuring and returned to profit after a decade of losses. The bank is still struggling to grow, however, as mortgages and lending to small British businesses continue to deliver lackluster returns.

RBS’s stock dropped 22% last year as the uncertainty of Brexit and its internal overhaul weighed on the price. The U.K. government still owns a majority stake and last sold shares in mid-2018, when the stock traded at about 270 pence. The state has the right to offload some of its stake in so-called directed buybacks.

To contact the reporter on this story: Stefania Spezzati in London at sspezzati@bloomberg.net

To contact the editors responsible for this story: Ambereen Choudhury at achoudhury@bloomberg.net, Marion Dakers