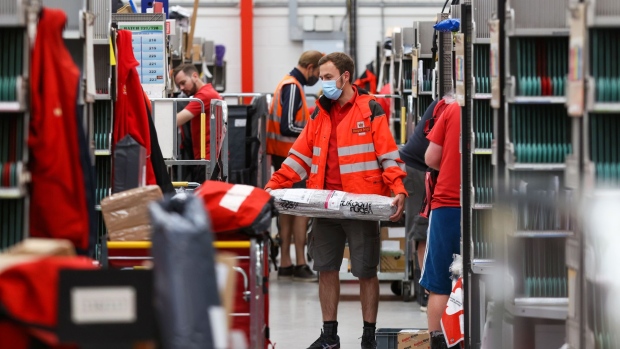 Royal Mail Plc reported a bumper Christmas delivery season and said the impact of the omicron strain of Covid-19 on staff absences is beginning to recede.

The 500-year-old U.K. postal service was one of the biggest corporate beneficiaries of the pandemic as web-based purchases and home deliveries surged. Those gains now appear to be locked in, with parcel volumes up one-third from pre-coronavirus levels and receding only slightly from a year ago even with shops reopening.

“We expected some decline in parcel volumes given most retail stores were open during the period, unlike last year,” Chairman Keith Williams said in a statement Tuesday. “However, the trend towards customers wanting more parcels remains.”

Royal Mail shares jumped as much as 5.5%. They traded 4.5% higher at 456.1 pence as of 10:13 a.m. in London. The stock has gained about 50% in each of the past two years, spurred by a the online-shopping boom and a turnaround effort led by Williams.

With Covid-19 absences having peaked, the company is looking to further streamline its operations.

Some 15,000 workers were sick or isolating earlier this month as the fast-spreading omicron variant swept through Britain. While that was about twice the usual level, the situation is now improving, the company said.

As part of an ongoing restructuring, Royal Mail plans to eliminate around 700 managerial posts to deliver a 40 million-pound ($54 million) annual savings.

Earnings weren’t affected by omicron and Bernstein analyst Alex Irving said in a note that “the bear thesis of Covid absences hurting profitability looks not to be playing out.”