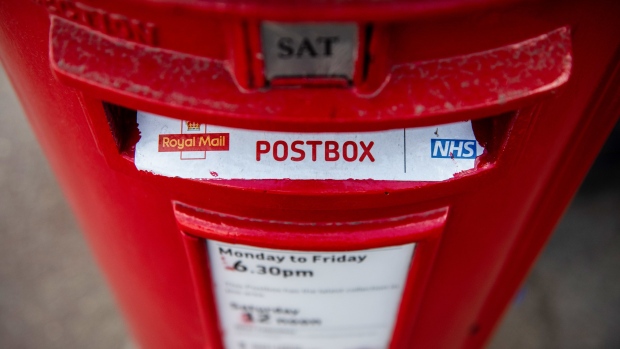 A postbox outside the Royal Mail Plc Charlton and Greenwich delivery office in London, UK, on Friday, Aug. 26. 2022. The deepening of labor strife at Royal Mail comes as companies across Britain suffer a surge in industrial action as soaring inflation stokes pay claims while labor remains in short supply. , Bloomberg

The 19 days of walkouts, a mixture of single strikes and rolling action, will cover peak mail periods in October and November, including the traditional discount shopping days of Black Friday and Cyber Monday, the Communication Workers Union said in a statement late Tuesday.

Royal Mail fell 8.7% before trading 5.4% lower as of 1:08 p.m. in London on Wednesday. The stock has lost almost two-thirds of its value this year.

The move to target parcel deliveries follows the firm’s declaration that it will withdraw from national accords and push ahead with changes to terms and conditions after failing to reach agreement on a shake-up of working practices.

“This is a significant announcement, but it is one which matches the level of anger our members feel at the way Royal Mail has treated them,” CWU General Secretary Dave Ward said in the release.

Prior Royal Mail strikes were limited to a few days but still led to significant delays for many postal items. Labor strife has deepened as the CWU resists management plans to move away from morning deliveries and toward late afternoon and early evening rounds to capture a greater share of a next-day parcels market whose growth has accelerated following pandemic lockdowns.

Royal Mail last week offered to take the dispute to arbitration at the same time as saying historic agreements would be dispensed with. The CWU, which is also pushing for pay increases to match spiraling inflation, didn’t respond to the offer, calling the plans an “all-out attack” on unionization.

All CWU members across functions will strike on Oct. 13, Oct. 20, Oct. 25 and Nov. 28. Other strike dates will only involve certain parts of the workforce, such as deliveries or processing, collection and distribution.