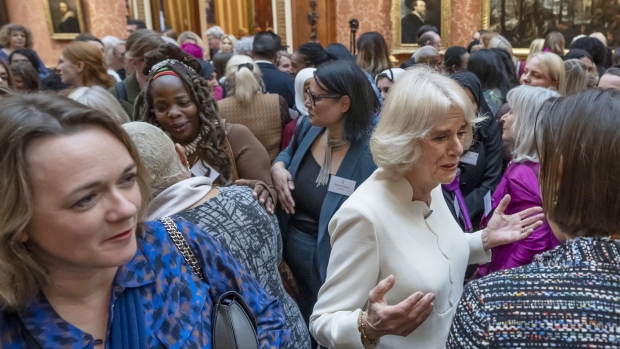 (Bloomberg) -- A racism scandal in the British royal household has overshadowed the Prince and Princess of Wales’s visit to the US, and reignited speculation around a Netflix documentary about the Duke and Duchess of Sussex.

The incident took place at a Buckingham Palace reception on Tuesday hosted by Queen Consort Camilla for campaigners against domestic violence. Ngozi Fulani, the founder of charity Sistah Space, said she was repeatedly asked by Lady Susan Hussey where she came from, despite saying she lived in London and was born in the UK.

Hussey stepped down from her role as a royal aide at the palace and apologized for her comments. The 83-year-old is also Prince William’s godmother.

The Prince and Princess of Wales are currently in Boston, Massachusetts on an official visit. The controversy has distracted from the trip, with the prince issuing a statement calling out his godmother’s comments, saying there is “no place for racism” in society.

On Thursday, Netflix released the first trailer for “Harry & Meghan,” a documentary that the Duke and Duchess of Sussex filmed about their lives over the past few years. The one-minute video shows the duchess crying, as well as the couple kissing and laughing. It also shows the Prince and Princess of Wales, and the duke saying in a voice-over “no-one sees what is happening behind closed doors.”

Fulani said a woman approached her and two other women of color during the reception. In a tweet, she called the woman “Lady SH,” who was later identified as Hussey.

On BBC Radio 4’s Today program, Fulani said the woman then touched her hair and moved it out of the way so she could see her name badge, which she described as a “surprise,” and then began to ask where she was from.

At first, Fulani said she explained she was from Sistah Space. But Fulani said the woman was not satisfied by the answer, and continued to ask the same question over and over again.

“She says: ‘No, where are you from?’” said Fulani. “I said we're based in Hackney. This went on for some time and at that time I'm thinking to myself, because she's asking me the same question is it because she can't hear that well? But it soon dawned on me very quickly that this was nothing to do with her capacity to understand, but this is her trying to make me really denounce my British citizenship.”

Fulani said that she and the two other women with her stood there “completely stunned” while the woman was talking for about five minutes. She added that it felt “like an interrogation” or “a kind of abuse.”

To Fulani, Hussey’s age is not an excuse for her behavior. Blaming her actions on that is “a disrespect, an ageism thing,” she said.

On Wednesday, Hussey resigned from her honorary position, which involved attending official royal events. She performed a similar role for Queen Elizabeth and was the late monarch’s longest-serving lady-in-waiting.

Prince and Princess of Wales’s US Visit

The incident has overshadowed the Prince and Princess of Wales’s visit to the US to promote the Earthshot Prize, an award for environmental innovations. Bloomberg Philanthropies is a founding partner of the Earthshot Prizes Global Alliance, and a funder of the prize, which was founded by Prince William.

They are in Boston, Massachusetts, for the launch of the prize on Friday. To mark the award, landmarks in Boston were lit up green on Wednesday. Last night they went to a basketball game between the Boston Celtics and Miami Heat, where they a crowd mostly cheered them.

In another twist, Netflix released the first trailer for Harry & Meghan on Thursday. The documentary is a six-part series made by Oscar-nominated director Liz Garbus, and it will focus on the “love story” of the couple, the duchess told New York Magazine in August. In the trailer, the duchess is shown crying, with the duke saying: “I had to do everything I could to protect my family.”

The couple previously accused an unnamed member of the royal family of racism in an interview with Oprah Winfrey which was released in 2021. The duchess said that someone in the family had asked what color their children’s skin would be. Both she and the duke refused to name the person who had made the comments, but Winfrey later said that it had not been Queen Elizabeth or her husband Prince Philip.