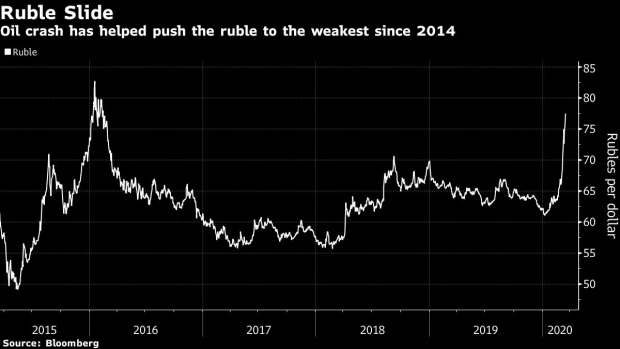 (Bloomberg) -- Russia’s ruble tumbled the most in emerging markets on Wednesday, erasing a fifth of its value in the year so far as crude sank to $28 per barrel.

Fears of a worldwide recession and a flight to the dollar are squeezing all risky assets, but the markets of the world’s biggest energy exporter are being hit particularly hard after President Vladimir Putin plunged into an oil-price war with Saudi Arabia. Russian local currency bonds and the ruble were one of the biggest overweight calls in the asset class last year. Now the ruble’s more than 20% plunge year-to-date is the worst performance globally.

While central banks from developed nations to emerging markets have come forward with emergency rate cuts to keep cash cheap for their battered economies, Russia is seen bucking the trend. Thirty-four out of 35 economists in a Bloomberg survey expect Governor Elvira Nabiullina to end a run of six cuts and put rates on hold on Friday in a bid to avoid weakening the currency.

Piotr Matys is the sole economist not predicting a cut on Friday. Nabiullina will be weighing the ruble against potential recession, making the direction of the rate decision a “very close call.” The impact of the ruble’s drop on inflation will be more muted than in 2014, said Matys, who predicts a 50 basis-point reduction.

“When central banks in both developed and emerging economies are slashing interest rates at emergency meetings perhaps we should seriously consider the possibility of a cut in Russia.”