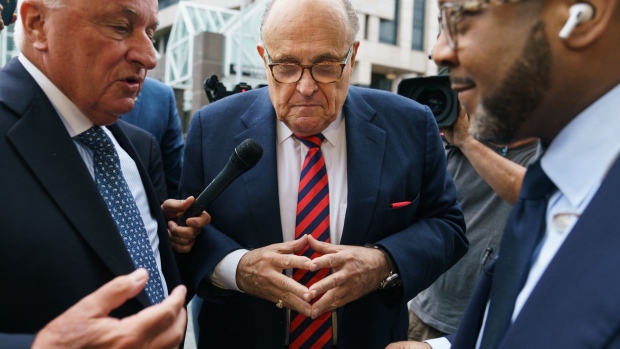 Rudy Giuliani, former lawyer to Donald Trump, and his attorney Robert Costello, left, arrive at Fulton County Superior Court in Atlanta, Georgia, US, on Wednesday, Aug. 17, 2022. Giuliani, who was a lead lawyer in then-President Donald Trump's attempts to overturn Joe Biden's 2020 election victory, is scheduled to testify on Wednesday before a grand jury in Atlanta investigating possible efforts to interfere with Georgia's vote. , Bloomberg

(Bloomberg) -- Rudy Giuliani “weaponized his law license” to try to undermine the US Constitution when he led a failed effort for Donald Trump to invalidate potentially millions of Pennsylvania votes after the 2020 election, DC Bar officials argued Monday.

Giuliani’s Washington law license is on the line as he faces allegations that he violated attorney practice rules by filing a “frivolous” post-election lawsuit in federal court that featured baseless claims of widespread fraud. One of former President Trump’s staunchest allies, Giuliani’s defense against the ethics complaint involves digging in two years later on his belief that there was evidence that the election was tainted by voting irregularities and fraud.

A panel in Washington is hearing arguments and testimony, and then will issue a report with recommendations. The DC Bar’s Board on Professional Responsibility will decide whether to adopt that report, and ultimately the District of Columbia Court of Appeals will rule on whether to impose sanctions, which could range from a written reprimand to stripping Giuliani’s license to practice.

A state court in New York previously suspended Giuliani’s license there after finding he put the public at risk by spreading lies about the 2020 election. His license in Washington also has been suspended while he fights the ethics complaint.

The head of the DC Bar’s disciplinary counsel’s office, Hamilton “Phil” Fox, argued Monday that Giuliani had pressed fraud claims before a federal judge in Pennsylvania that weren’t based on facts or the law. He said that the “least drastic” remedy that Giuliani pitched in the Pennsylvania case was to invalidate 680,000 votes in two counties, and the “most extreme” one was to toss out 7 million votes and have the state legislature declare the winner.

“It was particularly egregious that it occurred in this case, that a meritless complaint was filed, because it was an attempt to undermine the legitimacy of the presidential election,” Fox said.

Giuliani countered that he had acted reasonably based on information at the time from the Trump campaign and other parties that Pennsylvania’s election processes were unconstitutional. Pressed by Fox about the relevance of election-related allegations that weren’t in counties the campaign sued or that were described as limited or inadvertent, Giuliani said the campaign was under a time crunch and argued that evidence of irregularities elsewhere was still relevant.

The Pennsylvania lawsuit focused on two main issues that Giuliani insisted were part of a broader fraud conspiracy case across multiple states, with an eye to getting before the US Supreme Court. These included problems with Republican observers getting access to watch ballot counting, and differing county rules for how voters could fix mail-in ballot defects.

Even if Giuliani didn’t present fraud claims with the level of detail required by federal court rules, “the claims based on denial of equal protection and due process were properly pled and certainly were not frivolous,” Giuliani’s attorney, John Leventhal, a retired judge, told the hearing committee.

Giuliani is best known for his work in New York as a former mayor and US attorney, but he spent several years early in his career in Washington, holding senior posts at the Justice Department. He joined the DC Bar in 1976 and his membership became inactive starting in 2002, according to public records.

Giuliani was accused of violating two rules of professional conduct that govern the actions of lawyers practicing in Pennsylvania: pursuing legal claims without any “non-frivolous” basis in facts or the law, and participating in conduct that prejudiced the administration of justice.

Giuliani relied on “false or faulty statistics and analysis” in an attempt to show that tens of thousands of mail ballots for now President Joe Biden were invalid, the disciplinary counsel attorneys alleged.

Dozens of judges tossed out lawsuits attempting to undermine Biden’s wins in battleground states. Some cases were dismissed over whether plaintiffs had standing to sue and for pushing legally unsound theories; in cases where judges got to the merits of fraud claims, none found the evidence convincing.

The district judge in Pennsylvania who dismissed Giuliani’s case found none of the plaintiffs had standing to sue and that the campaign’s effort to stitch together claims that Pennsylvania had unconstitutionally managed certain electoral processes was like “Frankenstein’s monster.” The 3rd US Circuit Court of Appeals rejected Trump’s appeal in a 3-0 decision written by one of his own nominees to the court.

Giuliani was the disciplinary counsel’s first witness. He said Trump asked him to take over the campaign’s litigation strategy soon after the election, but also tried to distance himself from the original drafting and strategy around the Pennsylvania legal effort.

Giuliani hedged when asked if the record in the disciplinary proceedings included all of the written evidence that supported his claims in Pennsylvania, saying his legal team had produced “all that we can put our hands on” but added “there’s no doubt there’s more.” Fox asked where other documents would be if Giuliani didn’t have them and the law firms that Giuliani worked with in Pennsylvania hadn’t turned them over when they were subpoenaed. Giuliani suggested materials got lost as they handled multiple cases.

As Fox walked Giuliani through Pennsylvania’s processes for mail-in and provisional voting, Giuliani agreed that Fox’s descriptions were correct but then added that he had evidence that the rules weren’t followed.

Giuliani complained several times that Fox and the hearing committee members weren’t letting him provide the full context for his actions and legal theories in the Pennsylvania case. He received reassurances that he’d be allowed to make his full argument starting Wednesday, when it’s his turn to present witnesses.

Fox at times accused Giuliani of evading questions and not giving direct answers, and objected when Giuliani asked to confer with his lawyer in the middle of testifying. When Giuliani said that he thought he had a right to counsel, a hearing committee member admonished the former US attorney that he should know that witnesses can’t have such private discussions.

(Updates with more from hearing starting in 11th paragraph.)