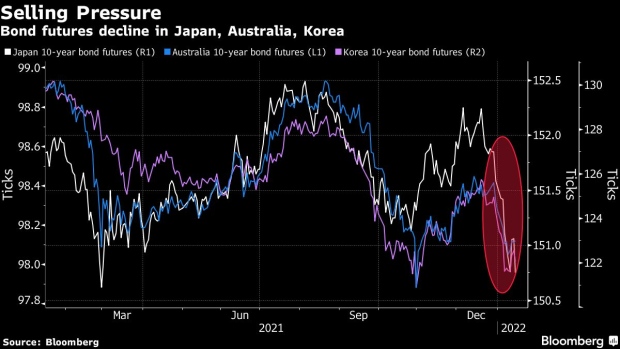 Pedestrians walk near Shimbashi station in the Shimbashi District of Tokyo, Japan, on Friday, Oct. 29, 2021. The Tokyo Metropolitan Government has lifted the restrictions this week for restaurants and bars that meet its criteria for taking appropriate measures to limit the spread of infections. Photographer: Soichiro Koriyama/Bloomberg , Bloomberg

(Bloomberg) -- Bonds dropped across most of Asia Friday amid concern the region won’t be spared the impact of rising global inflation pressures.

Shorter-maturity yields in Japan, Australia and South Korea all climbed, along with those on U.S. Treasuries, bringing an end to the global rally in debt markets earlier this week. Amid bond negative news was a hawkish interest-rate hike from the Bank of Korea and better-than-expected economic data in Australia.

Japan’s five-year yields rose to the highest level since early 2016 after Reuters reported the central bank may raise rates even before annual inflation reaches its target of 2%, citing a source similar with the BOJ’s thinking.

“Japan’s five-year yields have backed up to the highest level since 2016, dragging two- and five-year Australia and U.S. front-end sovereign yields higher in Asia,” said Prashant Newnaha, an Asia-Pacific rates strategist at TD Securities in Singapore. The increase is being driven by “speculation that the Bank of Japan may revise up its growth and inflation forecasts next week and dollar-yen stops have played their part in driving front-end yields higher,” he said.

Korea’s central bank raised its benchmark rate to 1.25% as economists forecast, underscoring its determination to curb inflation and limit financial risks to the economy. Policy makers said they expected inflation to stay above mid-2% range “for a considerable time.”

Australia reported a faster-than-anticipated growth in home loans, with the value of new loan commitments for owner-occupied housing jumping by the most since January 2021.