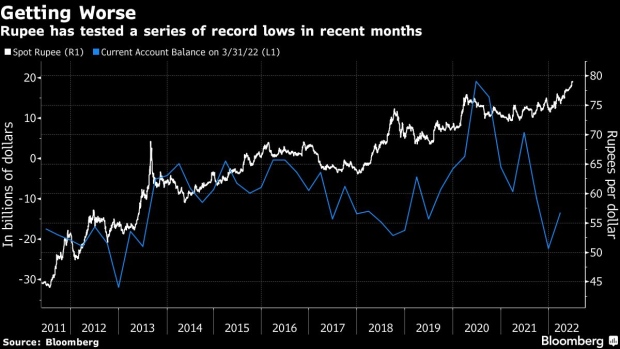 (Bloomberg) -- The Indian rupee tested a series of record lows in recent weeks and Standard Chartered Plc. foresees more losses for the currency in the coming months.

“The main two factors that are building up that can weaken the rupee are mainly on the worsening trade and capital flow dynamics,” Parul Mittal Sinha, head of India financial markets, said in an interview with Bloomberg TV on Tuesday, adding that that was the outlook of the bank’s trading desk. She said the currency may extend its decline to as low as 82 per dollar over the next three months.

India’s trade deficit widened the most on record last month as high global commodity prices further raised import costs, data showed Monday. That along with about $29 billion of outflows from the stock market will pile further pressure on the rupee at a time when rate hikes by the Federal Reserve are driving flows to US from emerging markets.

A shortfall in India’s current account -- the broadest measure of trade -- may widen to 3% of gross domestic product in the fiscal year ending March 31, Sinha said, nearly double the level seen in the previous year.

“If you look at rupee valuations on a REER basis, we see further room for correction as rupee is currently valued higher than average historical levels,” Sinha said. “We see another 2% correction in rupee levels or depreciation from current levels.”