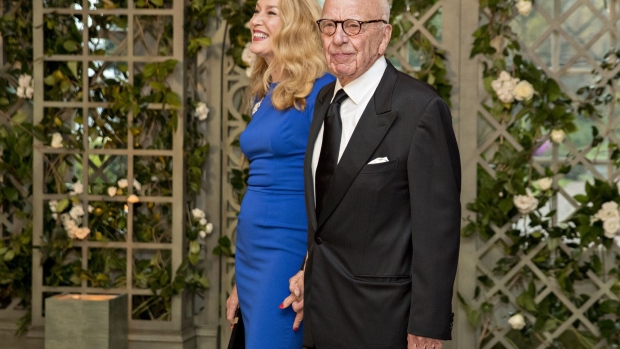 (Bloomberg) -- Media mogul Rupert Murdoch is on the cusp of his biggest win yet in his war against Google: a Justice Department antitrust lawsuit against the internet giant.

Media companies have long griped about the Alphabet Inc. unit’s dominance of the digital advertising market, but few are as outspoken -- or as influential -- as Murdoch’s News Corp.

The company, which publishes the Wall Street Journal and the Times of London, among other papers, has complained to regulators around the world that Google is abusing its power in the $330 billion digital ad market and siphoning revenue that should be going to media companies.

The campaign has had its share of victories. The European Union has levied billions of dollars in fines against Google and Australia has moved to force the company to pay for news. But action in the U.S., Google’s biggest market, has been elusive since enforcers closed an antitrust investigation seven years ago.

That’s about to change: The Justice Department, led by Attorney General William Barr, is preparing to file an antitrust lawsuit against the company, according to a person familiar with the matter. News Corp. representatives have met privately with the Justice Department about the investigation.

Last week, a trade group for news organizations that is chaired by a senior News Corp. executive published a research paper outlining how Google has leveraged its dominance to take publishers’ content and drive traffic without compensating them under copyright laws. The trade group, the News Media Alliance, sent the report to the Justice Department.

Earlier: Google Attacked by Publishers for Refusing to Pay for News

When it comes to the power of America’s tech giants, President Donald Trump and Murdoch are on the same page. As News Corp. chases Google around the world with claims the company is abusing its dominance, Trump has repeatedly lashed out against the internet search giant and its tech peers, complaining last month that they are controlled by the “Radical Left.”

While Trump recently criticized Murdoch’s Fox News for “doing nothing” to help him get elected in November, the network features some of the president’s most strident defenders, particularly in the face of his biggest crises like the coronavirus outbreak and the nationwide protests that gripped U.S. cities in the wake of George Floyd’s death in Minneapolis.

News Corp., the Justice Department and Google all declined to comment about News Corp.’s campaign. Google has previously said that advertisers and publishers have a lot of choices for the advertising technology they use and that competition is “flourishing.”

Since he took over the Justice Department in early 2019, Barr has been Trump’s most reliable foot-soldier in the effort to corral Google and its big-tech rivals. He opened a broad inquiry into whether they are thwarting competition -- then took a hands-on role in shaping the investigation. Last fall, after the Justice Department had announced the investigation, Barr met with Murdoch in New York, according to the New York Times.

The attorney general tipped his hand at his January 2019 confirmation hearing when he said: “I think a lot of people wonder how such huge behemoths that now exist in Silicon Valley have taken shape under the nose of the antitrust enforcers.”

When he learned in May 2019 that Makan Delrahim, his antitrust chief, had agreed to open inquiries into Google and Apple Inc. while handing over Facebook Inc. and Amazon.com Inc. to the Federal Trade Commission, Barr was miffed, according to a person familiar with the matter. Two months later, the Justice Department announced wide-ranging reviews of the top social media, retail and search platforms, effectively grabbing authority over all four tech giants and doing an end-run around the agreement with the FTC.

Barr also assigned his No. 2, Jeffrey Rosen, to oversee the probes. Rosen last fall brought on Ryan Shores, a seasoned antitrust litigator from Shearman & Sterling LLP, as a senior adviser in the tech company probes.

Barr, who clashed with tech companies over open-internet rules as general counsel at Verizon Communications Inc. and its predecessor from 1994 to 2008, advocates reining in the liability shield the tech companies enjoy for content on their platforms, a protection Trump is also trying to undermine. Last week, Barr proposed a broad reform to that immunity.

A Justice Department lawsuit against Google could potentially do what Murdoch and other publishers have long sought: disrupt Google’s hold over the digital advertising market and the revenue that comes with it. While any case could take years to play out, it carries the risk of forcing Google to split off parts or all of its advertising business.

“Publishers, particularly quality publishers that invest in content, haven’t believed the digital advertising ecosystem works for them for a long time,” said David Chavern, the president of the News Media Alliance, which represents news organizations, including News Corp. “The whole system is designed so you can’t follow the money. All we know is we’re not getting enough of it.”

The risk is high for Google. In the last major monopoly case brought by the U.S. -- the 1998 lawsuit the Bill Clinton administration pursued against Microsoft Corp. -- a judge initially ordered the breakup of the software company. That decision was overturned on appeal in 2001 and the George W. Bush administration settled the matter in 2002, with Microsoft agreeing to court supervision for nine years.

At issue for publishers is that Google owns much of the technology that delivers ads across the web, acting as the intermediary between advertisers and web publishers and collecting fees along the way in what is sometimes called the “ad tech tax.”

Publishers have little choice but to go through Google. Its technology acts as the gatekeeper to about 90% of advertising space that websites sell using automated systems, according to a paper issued last month outlining how Google may be violating antitrust laws in the digital ad market. That figure excludes so-called walled gardens like Amazon and Facebook, which use their own ad technology.

“The publishers are trying to monetize their content and they only have one choice in how to do that, which is Google,” said Yale University economist Fiona Scott Morton, one of the paper’s authors. Publishers also compete against Google’s YouTube to sell ad space. When a company depends on its direct competitor for revenue, “that’s a problem,” she said.

The coronavirus outbreak has raised the stakes for publishers, which have been battered by a drop in advertising revenue, leading to layoffs, furloughs and pay cuts across the industry.

Among publishers, News Corp. has been one of the most vocal about that lack of choice and the costs publishers incur as a result. In addition to meeting with Justice Department officials about Google, News Corp. has also testified in Congress about the company’s power over digital advertising.

“Dominant platforms take the overwhelming majority of advertising revenue without making any investment in the production of the news,” David Pitofsky, News Corp.’s general counsel, told the House antitrust subcommittee last year. The panel is investigating Google, including its conduct in the digital advertising market, and other technology platforms. “As a result, one of the pillars of the news industry’s business model, advertising revenue, is crumbling,” he said.

State attorneys general are also preparing to file an antitrust lawsuit against Google. News Corp. has made several campaign donations to Republican state attorneys general who have been outspoken about Google, according to data compiled by the National Institute on Money in Politics, which tracks donations.

News Corp.’s political action committee donated $2,000 to Texas Attorney General Ken Paxton less than two months before Paxton announced a multistate investigation into Google last year. It gave a total of $3,500 during 2018 and 2019 to Louisiana Attorney General Jeff Landry, who complained at a gathering of attorneys general last year that Google “gets to pick the winners and losers because the system is rigged in their favor and rife with conflicts.” Utah Attorney General Sean Reyes received $1,000 from News Corp. in February 2016, less than a month after he called on the FTC to revisit its closed investigation of Google. News Corp. donated another $2,500 to Reyes in July 2018, just as Republican attorneys general were speaking out about tech companies.

News Corp. has other ties to the states. Cristina Caffarra, an economist at consulting firm Charles River Associates who has worked for the company, is assisting Texas in its investigation of Google. Caffarra declined to comment on her role in the inquiry and Paxton, Reyes and Landry didn’t immediately respond to requests for comment on the donations.

One of the central disputes between Google and news publishers is how much of every advertising dollar actually ends up with publishers once it travels through Google’s technology, which facilitates the buying and selling of ad space between advertisers and websites.

In his House testimony, Pitofsky cited a test conducted by the Guardian newspaper in the U.K. that found just 30 cents of every dollar spent by an advertiser goes to the publisher, while the rest goes to the ad-tech infrastructure that delivers the ads. Pitofsky didn’t specifically identify Google as taking the other 70 cents.

Other analysts have found different estimates. A study issued in May that PricewaterhouseCoopers conducted for British advertiser trade group ISBA found publishers received about half the money spent by advertisers. Of the other half, 34% went to various fees and 15% couldn’t be accounted for.

Chavern from the News Media Alliance said even without Fox’s support for Trump, Google would be battling antitrust scrutiny now that lawmakers in both parties are raising concerns about the dominance of America’s tech giants.

“Murdoch gets outsized attention because he’s a person people know and he’s been willing to be vocal in a way that other people haven’t, but he’s not the only one who’s been complaining,” he said.