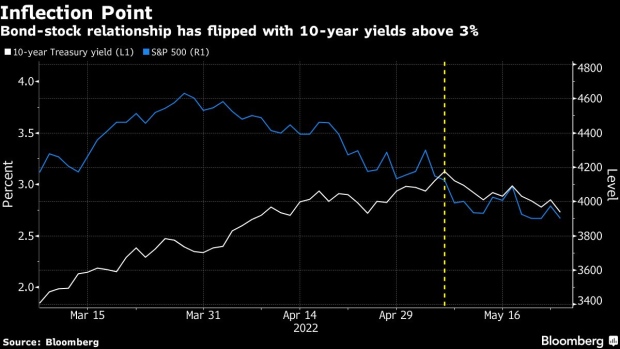 Stock market information on the floor of the New York Stock Exchange (NYSE) in New York, U.S., on Friday, April 29, 2022. Technology stocks extended losses Friday as shares of what were once market darlings at the height of the pandemic headed for their worst monthly drop since the great financial crisis. Photographer: Michael Nagle/Bloomberg , Bloomberg

(Bloomberg) -- A sudden shift in the choreography between stocks and bonds is evidence investors no longer consider inflation their biggest bugaboo.

Where once spiraling prices ruled their nightmares, now it’s an increasingly unanimous belief that the Federal Reserve’s efforts to subdue them will cast the world into a recession. Those concerns ramped up Tuesday when reports showed new home sales plunged and growth in the services economy slowed.

A flurry of Wall Street research is pointing out that when 10-year yields hit 3%, stock and bond prices stopped moving in unison -- shares kept falling while fixed-income started to bounce. A pattern in which equities drop and bonds hold firm often prevails when anxious investors are cashing in risky assets and seeking havens in a weakening economy.

“The bond market is clearly putting a greater focus on the risk of a recession and less of a concern on sustained inflation,” said Mark Freeman, chief investment officer at Socorro Asset Management LP. “The shift in the equity market is less explicit, but the continued pressure on lower-quality names -- high valuations with little or no earnings -- would be consistent with growing concerns over a material slowdown in the broader economy.”

The inflection is evident when plotting Treasury yields and the S&P 500 over the past three months. Rates rose at the same time stocks fell through early May, but the link began to reverse after yields peaked at 3.1%. Since then, bond prices have risen, sending yields lower, while selling in equities has persisted.

What makes 3% the magic number is anyone’s guess. Some strategists say the shift in the bond-stock link is an acknowledgment that the current deterioration in financial conditions -- the fastest this far into a tightening cycle in decades -- accords with Fed efforts to slow down the economy. Others welcome the development as proof that bonds can still work as a buffer during times of market turbulence.

“The bottom line is that growth concerns dominate market thinking,” Morgan Stanley strategist Guneet Dhingra wrote in a recent note. “Ten-year yields could range-trade around 3% until we have a resolution of the growth picture.”

The growth picture is darkening. Economic data have trailed forecasts, driving a Bloomberg measure of economic surprises to negative territory for only the second time since the 2020 pandemic outbreak.

Adding to the growth angst is disappointing guidance at firms like Snap Inc., Walmart Inc. and Target Corp., which cited everything from inflation to supply chain snarls and weakening consumer demand for their shortfalls.

While nothing yet suggests an imminent contraction in the economy or corporate earnings, investors aren’t waiting around for confirmation.

Stocks dropped Tuesday, with the S&P 500 closing within 3% of a bear market for the sixth session this month. A basket of profitless technology firms tumbled 7.9%, extending its 2022 decline to more than 50%.

Deep equity losses prompted a flight to the safety of government bonds. And traders dialed back the expected pace of Fed rate hikes, with the odds for three 50-basis point increases by September diminishing.

While benchmark interest rates are signaling gloom, other measures in fixed-income markets depict a less panicky backdrop. One is spreads on corporate bonds, a measure of perceived creditworthiness among borrowers. Volatility in credit spreads peaked in March and if history since 1998 is any guide, that would mean stocks are nearing a bottom, according to CreditSights.

As things stand now, the financial market points to roughly 40% implied odds of a recession, according to a JPMorgan Chase & Co. model tracking the S&P 500, credit spreads and the yield curve. That’s almost triple the probability suggested by near-term economic indicators.

JPMorgan strategists including Marko Kolanovic say that market signals on recessions can be premature. For instance, a similar warning was flashed around 2016 and gross domestic product continued to expand.

At the same time, ignoring market alarms can be disastrous too. Take stocks. Fourteen times the S&P 500 has completed the 20% plunge into a bear market in the last 95 years. In just three of those episodes did the American economy not shrink within a year.

As challenging as things look for the economy, there is a silver lining: the dreaded concerted seloff in stocks and bonds has, at least for now, ened. Fueled by concern that the Fed might slam on the brakes to fight the hottest inflation in four decades, the S&P 500 tumbled 13% during the January-April period while Treasuries sank 8.5%. That’s the worst cross-asset performance to start a year in history.

Now, Treasury bonds just advanced for a second week for the first back-to-back gain this year, offering cushion for asset allocators who watched stocks mired in its longest streak of weekly losses in two decades.

“We have gone from a situation where both stocks and bonds were sold on the back of de-leveraging, to a situation where bonds rallied as stocks fell, nudging stock/bond correlations toward a more normal (negative) levels,” JPMorgan’s Kolanovic wrote in a note Monday. “We do indeed think this is where things could be gradually heading, but we acknowledge this is not likely to play out in a linear way.”