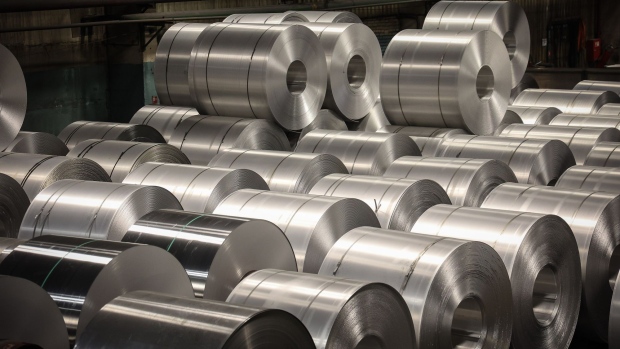 Aluminum rolls in a storage area at the Sayanal foil mill, operated by United Co. Rusal, in Sayanogorsk, Russia, on Wednesday, May 26, 2021. United Co. Rusal International PJSC’s parent said the company has produced aluminum with the lowest carbon footprint as the race for cleaner sources of the metal intensifies. Photographer: Andrey Rudakov/Bloomberg , Bloomberg

(Bloomberg) -- Two top executives at United Co. Rusal International PJSC agreed to buy out the U.S. unit of the Russian aluminum giant and plan to rename the company.

Brian Hesse, former chief executive officer and president of Rusal America, and Andrey Donets, a former senior vice president, will purchase the unit, Hesse confirmed in an email. All Rusal America contracts will transfer to the new company, to be called PerenniAL. Researcher Harbor Intelligence first reported the move in a note seen by Bloomberg.

The new company will continue to selling Rusal’s metal. It will also offer aluminum from other suppliers, both primary and secondary products such as billet, foundry and slab.

The move comes as some nations and companies across the globe shy away from doing business with Russian and Russian-linked firms following the country’s invasion of Ukraine. Rusal’s supply of alumina -- the key ingredient used to make aluminum -- came under pressure after Australia banned exports to Russia.

PerenniAL will remain headquartered in Rye Brook, New York, and Rusal America’s existing employees will become PerenniAL employees. The change will be effective on April 29.