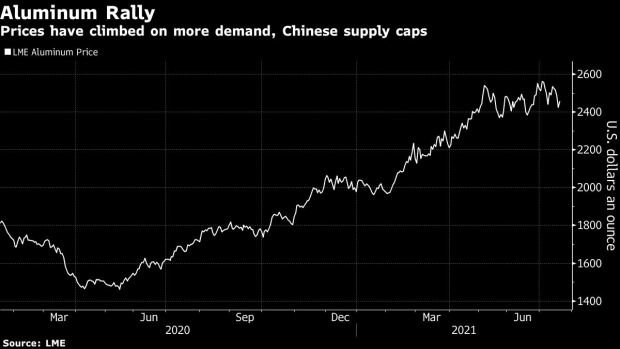 Bound stacks of aluminium ingots ready for shipping in the foundry at the Sayanogorsk Aluminium Smelter, operated by United Co. Rusal, in Sayanogorsk, Russia, on Wednesday, May 26, 2021. United Co. Rusal International PJSC’s parent said the company has produced aluminum with the lowest carbon footprint as the race for cleaner sources of the metal intensifies. Photographer: Andrey Rudakov/Bloomberg , Bloomberg

(Bloomberg) -- Russia’s United Co. Rusal International PJSC, the biggest aluminum producer outside China, may curb exports of the metal once duties on shipments come into effect next month.

The company, which exports about 3 million tons of aluminum annually, may reduce those sales by hundreds of thousands of tons this year because the levies will make some shipments unprofitable, according to Roman Andryushin, chief of sales for the domestic market and China.

Russia in June announced duties of at least 15% on steel, nickel, aluminum and copper exports from Aug. 1 -- with varying rates -- to help cool surging commodities prices and boost state coffers. The government has said the taxes, which will last until year-end, will be temporary and that it’ll seek more sustainable measures after that.

Andryushin said the levies are unjust, because Rusal will invest billions of dollars modernizing smelters, but also because the tax won’t cut local prices much because aluminum accounts for a relatively small share of Russia’s construction-industry costs, including in state projects. He also pointed to Rusal’s supply of high value added products for the domestic market and its long-term sales contracts.

The “export tax for the aluminum industry is unfair,” Andryushin told reporters in Moscow.

Rusal is unlikely to pass the tax costs onto customers, partly because it doesn’t have the option to include the levies in most of its long-term agreements. Where it is possible to revise sales prices, the market conditions may not make it worthwhile, he said.

The tax may mean Rusal considers idling some unprofitable production, while the ramp-up of its newly built Taishet project may be slower than previously expected, Andryushin said.

Separately, Rusal expects aluminum demand to remain strong and prices may rise, although they probably won’t reach an all-time high above $3,300 a ton, he said. The metal has rallied about 23% this year on a rebounding economy, China’s moves to cap supply and prospects for more demand from the electric-car and solar sectors.