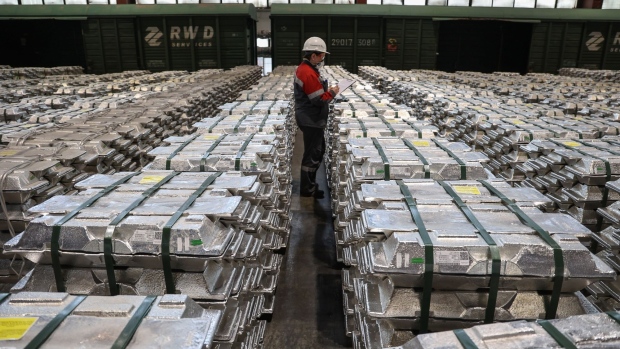 A worker inspects bound stacks of aluminium ingots ready for shipping in the foundry at the Sayanogorsk Aluminium Smelter, operated by United Co. Rusal, in Sayanogorsk, Russia, on Wednesday, May 26, 2021. United Co. Rusal International PJSC’s parent said the company has produced aluminum with the lowest carbon footprint as the race for cleaner sources of the metal intensifies. , Bloomberg

(Bloomberg) -- United Co. Rusal International PJSC said there’s “no basis” for any moves by the London Metal Exchange to block its aluminum, ratcheting up its pushback after US rival Alcoa Corp. said the exchange should stop accepting Russian metal.

The metals industry has been grappling with the question of how to handle Russian supplies since the invasion of Ukraine in February, but the debate has intensified in over the past month or so. Last week, the LME confirmed it was considering launching a discussion paper on whether to block new supplies of Russian metal from being delivered to its network of warehouses.

Russian aluminum is not sanctioned by the US or European Union. However, certain European buyers have been trying to avoid Russian production, and some in the industry have expressed concern that big volumes of unwanted metal could be dumped onto the LME, depressing and distorting the global benchmark price.

“Rusal refutes in the strongest terms and suggestion that it is planning to deliver large quantities of metal on the LME, in Europe, the U.S. or any other location,” the company said in a statement on Wednesday. The company criticized “alarmist views expressed by other interested parties that we regard as being damaging to the confidence within industry as a whole.”

Alcoa, the largest US aluminum producer, told the LME that it shouldn’t be used as a market of last resort for Russian metal, Bloomberg reported on Tuesday. Alcoa Chief Commercial Officer Kelly Thomas wrote in a letter that the exchange should to take action to “avert an impending crisis” and cautioned about the threat that pricing no longer reflects the fundamentals of the industry, according to people familiar with the matter.

“Rusal’s sales book is solid, and the company has no need to deliver metal to LME warehouses,” the company said on Wednesday. “There is no basis upon which to take any action regarding warrantability of Rusal’s metal, and any decision otherwise could have long-lasting negative effects on the market.”