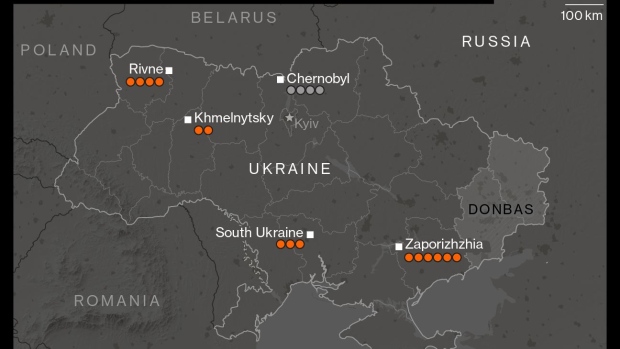 (Bloomberg) -- President Vladimir Putin was denounced for his “recklessness” after Ukraine said that Russian forces attacked a nuclear power plant, raising the stakes in the nine-day-old war and prompting calls for an even more robust response to the Kremlin’s aggression.

NATO foreign ministers meeting in Brussels on Friday condemned what Kyiv described as an assault on the Zaporizhzhia facility in southeast Ukraine, Europe’s largest atomic generator. If confirmed, it would be the first time an operating nuclear plant has been deliberately targeted by military forces.

German Foreign Minister Annalena Baerbock said that “all channels” had been used to communicate to Russia that it shouldn’t commit such an act. “There are rules in this world, even for the Russian president,” she told reporters.

While Ukraine’s nuclear agency said that radiation levels at the site were normal, European stocks and U.S. futures dropped as investors digested the implications of such an attack for the course of the war.

EXPLAINER: What We Know About Ukraine’s Shelled Nuclear Plant

Lithuanian President Gitanas Nauseda called on the European Union to give up gas and oil imports from Russia and disconnect all Russian banks from the SWIFT financial system in response.

It’s “a crime, nuclear terrorism” that shows the Russian government’s “brutality” and cynicism, he said in an interview with Bloomberg TV. “This goes far beyond the behavior what we call normal human beings.”

Russia’s Defense Ministry said that its forces have held the nuclear plant since Feb. 28 and accused Ukraine of a “provocation.”

Around 100 Russian military vehicles broke through a roadblock near the plant overnight, entering the city of Energodar, and began to fire on the facility, Petro Kotin, the head of the Energoatom regulator said in a statement.

A shell hit the plant’s first production unit, which was undergoing maintenance. The second and third units were put into safe “cold mode” and the fourth remains in operation, as it’s at the most distance from the shelling zone, Kotin said. He added that according to Energoatom’s latest information, radioactivity levels at the plant are within the norm.

“If there were to be any emissions, they would go toward Crimea and the Black Sea,” Pia Vesterbacka, director of environmental radiation surveillance at the Finnish Radiation and Nuclear Safety Authority, told reporters on Friday. “Most would be in Ukraine, but some could go to Russia, depending on how the winds turn.”

The incident marked a further deterioration in the conflict, which has seen Russia accused of deliberately targeting civilians as it tries to remove the leadership in Kyiv and install a pro-Russia government, triggering one of the worst security crisis in Europe since World War II.

Addressing his Security Council late on Thursday, Putin claimed that Russian troops are fighting “neo-Nazis” and forces from outside Ukraine, whom he accused of using civilians as human shields and holding foreigners hostage.

Russian troops are concentrating on encircling Kyiv while continuing attempts to advance on the port city of Mariupol in the south, the general staff of the Ukrainian army said in a statement earlier on Friday. It added that preparations continued for the landing of Russian assault troops near Odesa.

With more than a million people fleeing the fighting to neighboring countries, efforts continued to try and establish humanitarian corridors to allow safe passage.

Yet even as the death toll mounts, the nuclear allegations shocked an already horrified world. President Joe Biden spoke with Ukrainian President Volodymyr Zelenskiy as reports of the attack emerged and the leaders called on Russia “to cease its military activities in the area,” according to a White House statement.

“Europe must wake up,” Zelenskiy said in a video message early on Friday. “Only urgent Europe actions can stop Russian troops.”

Russia already controls Ukraine’s defunct Chernobyl nuclear facility, site of a major disaster in 1986, and its forces had been closing in on Zaporizhzhia for days, with the IAEA voicing mounting concerns over the safety of the country’s nuclear installations as fighting escalated.

There are Bigger Atomic Worries Than Chernobyl in Ukraine (1)

In recent days, the international nuclear watchdog has considered a 30-kilometer exclusion zone surrounding all of Ukraine’s reactors, acknowledging the unprecedented nature of combat taking place in and around the facilities.

“We condemn the attacks on civilians and overnight we are also seeing reports about the attack against a nuclear power plant,” NATO Secretary General Jens Stoltenberg told reporters in Brussels. “This just demonstrates the recklessness of this war and the importance of ending it and the importance of Russia withdrawing all its troops and engaging in good faith in diplomatic efforts.”