Russia offered yet another explanation for why its oil production may exceed its OPEC+ target for November, months after promising to improve the country’s lax implementation of output cuts.

“We’re trying to reach the planned level,” Energy Minister Alexander Novak told reporters in Moscow on Wednesday. “There are certain nuances that, as we’ve said before, have an impact during winter season.”

The startup of new natural gas fields that yield higher volumes of a light oil called condensate has lifted Russia’s production figures, but “it shouldn’t be included in overall volumes of output” because it isn’t exported, Novak said.

Russia has earned more money than Saudi Arabia this year from its cooperation agreement with the Organization of Petroleum Exporting Countries, partly because it has repeatedly fallen short of its pledged production cut. Under the pact, which runs from January 2019 to the end of March 2020, Russia committed to cut its daily output by 228,000 barrels from a baseline level of 11.418 million barrels. Daily output has averaged 11.244 million barrels so far this year according to government data, 54,000 barrels above the target. 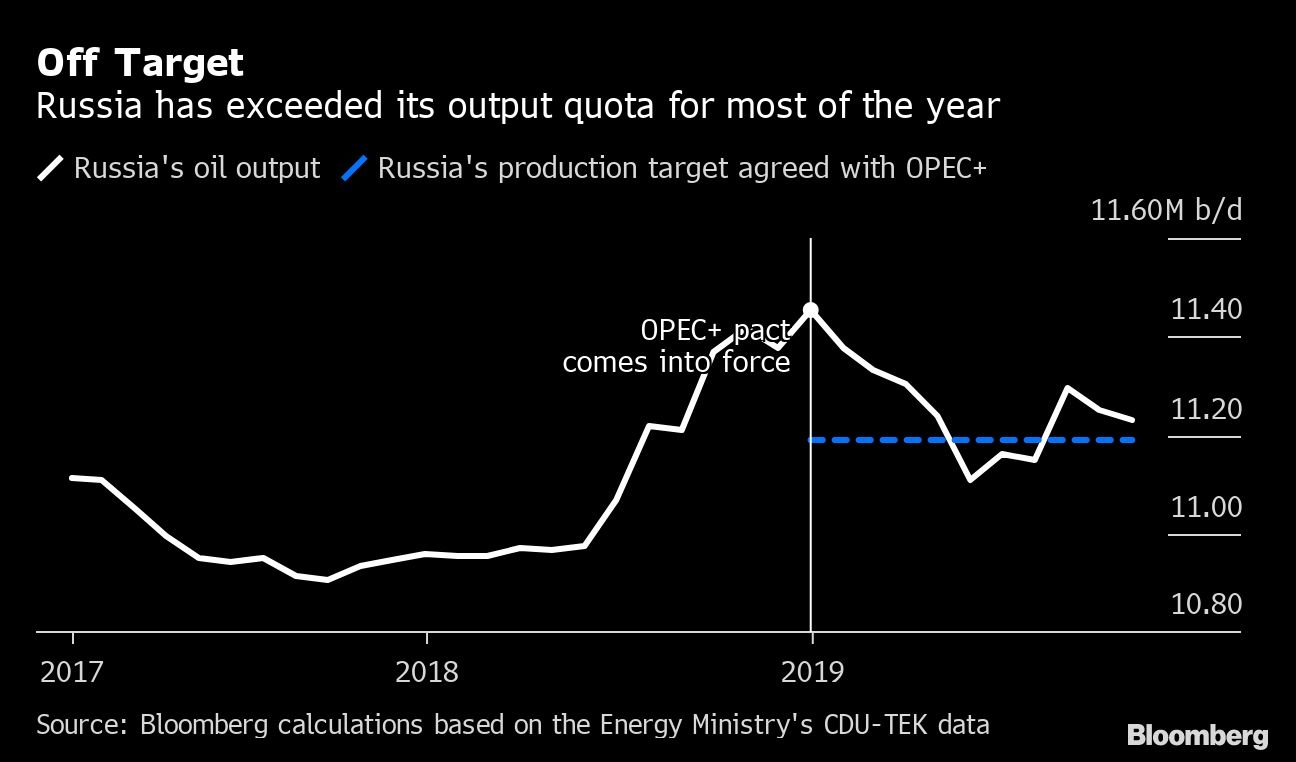 Novak has offered a number of excuses for Russia’s failure to comply. In January and February, the nation made slow progress reducing crude output because the harsh climate and geological conditions of many oil-producing regions didn’t allow sharp cuts.

In March and April, the Energy Ministry explained away its higher output by saying production-sharing agreements — three projects including international partners such as Exxon Mobil Corp. — should be excluded when calculating how much was pumped under the OPEC+ deal.

From May to July, Russia actually cut output more deeply than required after its largest crude-export pipeline was contaminated with chemicals, forcing parts of the link to shut down. Yet the Druzhba crisis was used to justify higher production in August, as companies sought to offset lost volumes.

The Energy Ministry has also published figures for average daily oil flows that differ from Bloomberg calculations, because the government was using different ratios to convert metric tons into barrels for each individual field. Bloomberg calculations are based on a uniform conversion rate of 7.33 barrels-per-ton.

--With assistance from Dina Khrennikova.