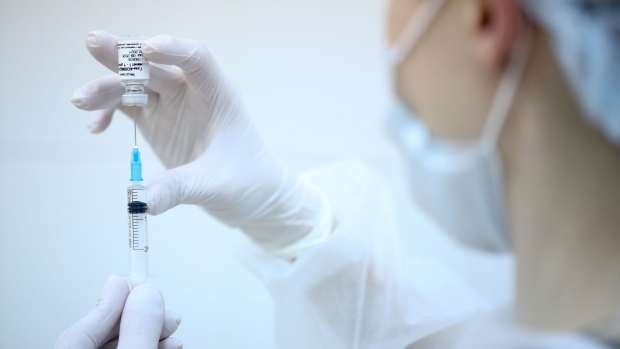 A heath worker draws the 'Gam-COVID-Vac', also known as 'Sputnik V', COVID-19 vaccine, developed by the Gamaleya National Research Center for Epidemiology and Microbiology and the Russian Direct Investment Fund (RDIF), from a vial during a post-registration phase trial at the City Clinic #46 in Moscow, Russia, on Wednesday, Sept. 23, 2020. The Russian Direct Investment Fund will sell 32 million doses of Sputnik V to Mexico, with deliveries starting in November, the sovereign wealth fund said in a statement. , Bloomberg

Russia has begun production of a second COVID-19 vaccine that hasn’t completed trials as the Kremlin rushes to develop a shield against the pandemic.

Output of the vaccine, developed by former biological weapons lab Vector State Virology and Biotechnology Center in Novosibirsk, will ramp up by the end of the year, Anna Popova, the head of Russia’s public-health watchdog, said at a conference Tuesday, according to state-run RIA Novosti.

President Vladimir Putin announced the approval of Vector’s vaccine earlier this month, following a similar trajectory of the Sputnik V inoculation in August, which he claimed was the first to be registered in the world. Both were tested on a limited number of people before receiving provisional registration that will allow for widespread use as they undergo Phase 3 trials to prove they are safe and effective.

The authorities are hoping the experimental vaccines will stem the tide of the pandemic while minimizing the economic fallout that a lockdown would entail. Russia, with the fourth-most COVID-19 cases globally, is balking at reinstating restrictions to combat a second wave even as the number of new cases and deaths is at a record.

However, scientists and pharmaceutical companies say more testing is necessary to prove safety and effectiveness before such vaccines should be certified for use. In the U.S., fast-track development requires at least two months of follow-up data from Phase 3 trials before a developer can apply for emergency-use authorization.

Unlike Sputnik V, which uses adenovirus to stimulate the immune system against COVID-19, Vector’s vaccine is a mix of short amino-acid chains, called peptides, that induce an immune response.

Even as Russia cuts corners to allow mass usage, scaling up production of the vaccines is proving challenging. When the Vector vaccine received its registration Oct. 14, Deputy Prime Minister Tatyana Golikova said the first 60,000 doses would be produced soon.

Kirill Dmitriev, the chief of the Russian Direct Investment Fund that helped develop Sputnik V, said in July that Russia aimed to produce 30 million doses in 2020. That goal was dubbed “impossible” this month by Industry Minister Denis Manturov, who said a maximum of 2.3 million doses would be made.

“We have difficulties with the volumes of production and scaling,” said Alexey Repik, the owner of R-Pharm, a Russian pharmaceutical company that will produce Sputnik V.

This week, Russian pharmaceutical company Generium announced it has produced 90,000 doses of Sputnik V and will ramp up output to as much as 100 million doses annually, though it didn’t provide a timeline. That makes it the third company to successfully produce the vaccine in volume, after its developer, Moscow’s Gamaleya Institute, and Vladimir Evtushenkov’s Binnofarm.

Sputnik V is complex to make because relatively large quantities are required and the vaccine uses different adenovirus strains in each of its two shots. It also must be kept frozen before use, adding to logistical challenges.

“The problems arose at the stage of transferring production from the Gamaleya Institute to other sites,” Dmitry Kulish, a biologist and a Moscow-based Skoltech university professor who had worked in Russia’s pharmaceutical business, said. The domestic industry is also dependent on foreign equipment, he said.

The first doses of the vaccines will be given to front-line workers. Moscow plans to begin mass vaccinations by December or January, Mayor Sergei Sobyanin wrote on his blog this month.

Russia may register a third vaccine, developed by Moscow’s Chumakov Federal Scientific Center, by December. Each vaccine will have its own target audience, according to Popova.

“Today we have the ability to produce a significant amount of vaccine without burdening a single production site,” Popova said, Ria Novosti reported.