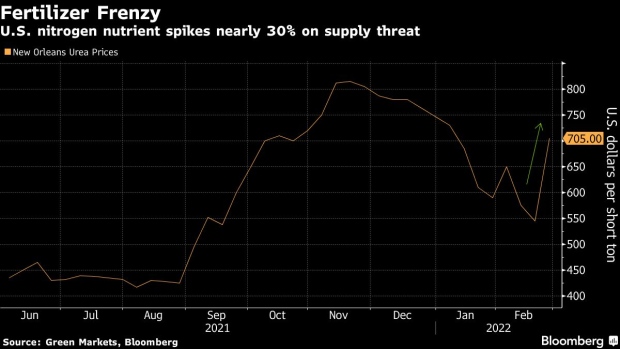 (Bloomberg) -- Russia is urging the country’s fertilizer producers to halt exports in a move that could send soaring global fertilizer prices even higher.

Russia’s Ministry of Industry and Trade recommended domestic fertilizer producers cut volumes to farmers due to delivery issues with foreign logistics companies, according to a Friday statement. The country, which has been facing increasing international sanctions since invading Ukraine, is a major low-cost exporter of every type of crop nutrient.

Fertilizer prices were already soaring due to Europe’s natural gas crunch that forced some producers to reduce production or, in some cases, close. Natural gas is a key ingredient in making nitrogen-based fertilizers. Elevated freight rates, tariffs, extreme weather and sanctions on Belarus, which accounts for about a fifth of the global supply of potash, also add to rising prices.

Prices for the widely used nitrogen fertilizer urea surged 29% in New Orleans for the week ended Feb. 25 — a record jump for the 45-year Green Markets index — after Russia began its attack.

“Russia is the world’s largest urea exporter and second largest potash exporter,” Alexis Maxwell, an analyst for Bloomberg’s Green Markets, said in an email. “Their absence from the global market would squeeze buyers already scrambling for tons.”