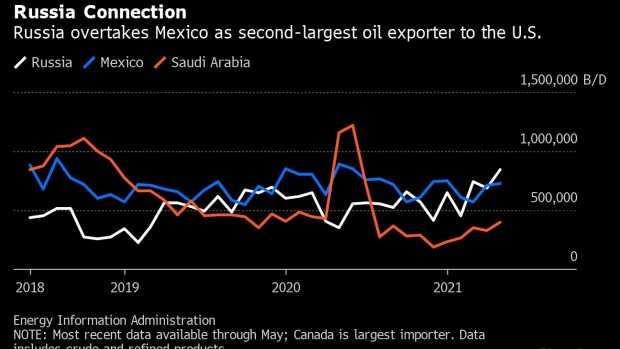 (Bloomberg) -- Russia is supplying more oil to the U.S. than any other foreign producer aside from Canada as American refiners scour the globe for gasoline-rich feedstocks to feed surging motor-fuel demand.

U.S. imports of crude and refined petroleum products from its former Cold War adversary surged 23% in May to 844,000 barrels a day from the prior month, government data showed. Mexico was edged out of the No. 2 spot as its shipments to its northern neighbor rose by less than 3%.

Russia has become a favored source for U.S. fuel makers largely because it producers ample supplies of semi-refined oils such as Mazut 100, an ideal feedstock for American refineries accustomed to processing thick, sludgy crude from Venezuela and the Middle East. Cargoes from the former dried up due to sanctions, and OPEC-orchestrated output limits have crimped shipments from the latter, leaving an opening for Russian exporters.

The rise in Russian shipments is happening despite intensifying rancor between Washington and the Kremlin over a controversial pipeline that will haul Siberian gas to Germany. But in the absence of actual sanctions, U.S. companies are not bound by the diplomatic and geopolitical goals of the White House.

Russian feedstock “seems to be functioning as a good substitute for Venezuelan oil, particularly in the high-demand summer season,” said Shirin Lakhani, a senior oil analyst at Rapidan Energy Group.

Despite Russia’s ascendence, it’s no threat to Canada’s preeminence as the largest foreign crude supplier to the world’s biggest economy. In fact, Canada accounts for almost half of U.S. imports, delivering almost five times as much as Russia, the data showed.

Nevertheless, the importance of the U.S. market looms large in Moscow, where Federal Customs Service records show America is the single largest buyer of the nation’s heavy-oil products, the category that includes Mazut 100. U.S. buyers absorbed almost one-fifth of Russian heavy-oil exports during the first five months of the year.

Most of the U.S.-bound Russian crude has docked along the West Coast to feed refineries like Phillips 66’s plant 100 miles (160 kilometers) north of Seattle and California refineries owned by Chevron Corp. and Valero Energy Corp., government data showed.

Refiners in Texas and Louisiana also have been buying Russian oil products; just last week, 1.5 million barrels from the Black and Baltic seas landed in the region. The influx was substantial enough to cut prices at the Houston Ship Channel by 3% earlier this week.

Lower prices relative to other available sources of similar fuel oils will invite even more purchasing, she said.