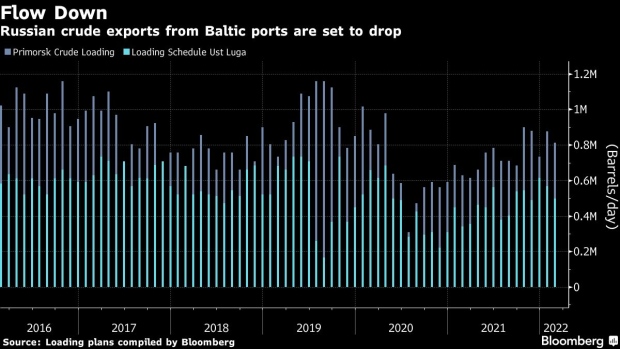 (Bloomberg) -- Russia’s exports of its main grade of crude oil will slump to a five-month low in February, underscoring the challenges the country faces bringing supply to the global market at a time when there’s optimism over a demand recovery.

The world’s second-largest oil exporter will ship 1.31 million barrels a day of its flagship Urals crude from the nation’s Baltic seaports next month. That’s the smallest flow since September. Much of that crude ends up at refineries in northwest Europe.

It’s difficult to know what the export slump will mean for the nation’s oil production, which is meant to be rising in line with its commitments to OPEC+. Russia’s domestic refineries appear to be running hard -- potentially soaking up barrels that would otherwise go for export -- and Russia also looks set to send more crude directly into Europe through its giant Druzhba pipeline network this year.

Solid European margins from processing Urals have buoyed the grade, which remains a crude of choice for more-complex oil refineries in northwest Europe, according to analysts at JBC Energy.

Headline Brent oil prices have rallied 9% this year on signs that demand will overcome the omicron variant.

The export slump next month coincides with the lowest levels of maintenance at Russian refineries in about two years, a sign that the nation’s own crude processing could be high. Refiners typically carry out maintenance in spring, which could start to curb demand. Total seaborne Urals exports -- including from a port in the Black Sea -- will be the lowest since December.

The price of Urals has risen in northwest Europe in recent weeks. The grade was priced by S&P Global Platts on Jan. 24 at a discount of 70 cents a barrel to the Dated Brent marker, the strongest in almost a year. Spot trades have also strengthened, with a cargo last sold at a discount of 30 to 40 cents a barrel, said traders involved in the market.