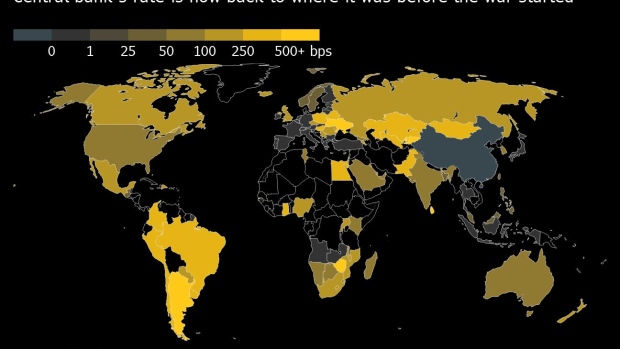 (Bloomberg) -- Russia’s central bank lowered interest rates to their level before the invasion of Ukraine, as the ruble remains under pressure to appreciate and the economy reels from sanctions.

Following a large cut at an extraordinary meeting two weeks ago, policy makers used their scheduled session on Friday to reduce the benchmark again, this time to 9.5% from 11%. A majority in a Bloomberg survey of 23 economists predicted a smaller reduction of 100 basis points.

The Bank of Russia said in a statement that it “will consider the necessity of reducing the key rate at its upcoming meetings.” Governor Elvira Nabiullina will take questions starting at 3 p.m. in Moscow.

The fourth straight decrease is also the smallest in an easing cycle that’s taken advantage of a slowdown in inflation after a searing rally in the ruble. With rates now down sharply from their post-war peak, the focus is increasingly on bringing relief to consumers and turning around the recession-struck economy, especially as disruptions to trade could create new risks for prices.

“The economy is shrinking, and the situation will get worse,” Dmitry Polevoy, economist at Locko-Invest in Moscow, who revised down his call on Thursday and predicted a cut to 9%-9.5%, said before the announcement. “Demand for credit is low, the banking system is back up on its feet, the ruble is appreciating without restraint, but the real rate is still high by historical standards.”

If the worst of inflation fears don’t materialize, the key rate can reach 8% by the end of the year, according to Polevoy. The central bank doesn’t expect to achieve its 4% target until 2024.

“There’s still risk of a resurgence in price pressure as inventories run down. Russian producers will need to find alternative suppliers for some critical components, while households may face higher costs from domestic substitutes for foreign consumer goods.”

A swoon in consumer spending and intensifying gains in the ruble, which has been shielded by capital controls, are helping keep inflation in check after an intense but brief run-up in prices.

Authorities now need to revive domestic demand to balance out surging exports of commodities that have powered the currency’s rebound to near the strongest in four years. Besides rate cuts, the central bank has also been loosening the screws of capital controls to relieve pressure on the ruble.

Still, although annual inflation decelerated near 17% in May, risks loom ahead. Restrictions on trade, imposed in punishment for the war, raise the threat of shortages, while the rerouting of shipments to bypass the sanctions adds to costs.

“If new imports or import substitution are insufficient, then a supply deficit may contribute more to inflation than a decrease in demand can suppress it,” Finam economist Olga Belenkaya said.