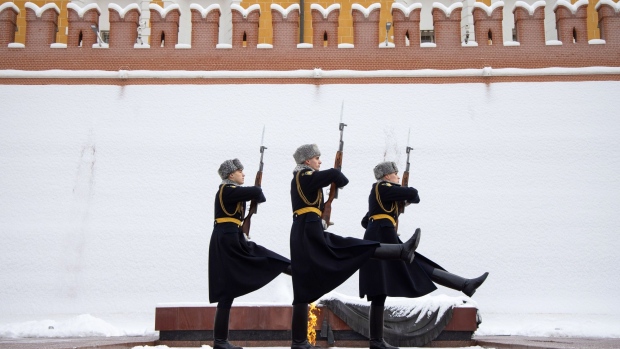 Soldiers of the presidential regiment patrol at the grave of the unknown soldier near the Kremlin wall in Moscow, Russia, on Tuesday, Dec. 14, 2021. Russia's inflation has continued to spike, reaching 8.4% in November. , Bloomberg

(Bloomberg) -- Russia demanded the North Atlantic Treaty Organization withdraw its forces to positions they occupied in 1997 as it set out sweeping proposals for a massive Western pullback in two draft security treaties presented to the U.S. this week.

The demands come amid spiraling tensions between Russia and the U.S. and Europe over a massive build-up of Russian forces close to the border with Ukraine. The U.S. says its intelligence shows Russia may be preparing for an invasion of Ukraine as soon as next month, something the Kremlin denies.

Russia and all NATO states that were members in May 1997, before the first eastern European countries were invited to join the alliance, shouldn’t “deploy military forces and weaponry on the territory of any of the other States in Europe” that were not already in place on that date, according to one of the treaties published Friday by the Foreign Ministry in Moscow.

The U.S. must pledge to bar entry to NATO for ex-Soviet states such as Ukraine and Georgia and refuse to make use of their military infrastructure or develop bilateral defense ties with them, according to the second treaty.

Russia and the U.S. would also agree not to fly heavy bombers armed with nuclear or non-nuclear weapons or deploy warships “outside national airspace and national territorial waters” if they could be used to attack another country, the document said.

NATO has already rejected some of Russia’s demands.

Russian President Vladimir Putin has insisted on binding security guarantees from the West that NATO won’t expand further eastward toward Russia’s border or station offensive weapons near his country. He and U.S. President Joe Biden held a Dec. 7 videoconference on the crisis, when the U.S. leader warned that invading Ukraine would lead to unprecedented economic sanctions against Russia, according to the White House. Biden also agreed to hold a dialog between NATO and Russia on Moscow’s security concerns.

The proposals passed to the U.S. on Wednesday and to NATO states on Thursday are not intended to be rejected, Russian Deputy Foreign Minister Sergei Ryabkov told reporters at a briefing Friday.

“Our position is that we need to remove all this and return to the positions of 1997,” Ryabkov said. “Enough is enough.”