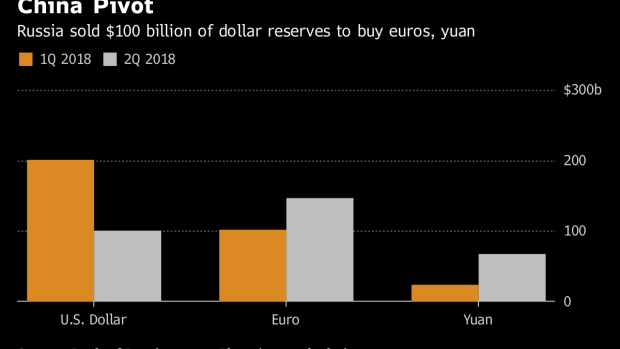 (Bloomberg) -- Russia’s central bank dumped $101 billion in U.S. holdings from its huge reserves, shifting into euros and yuan last spring amid a new round of U.S. sanctions.

The central bank moved the equivalent of $44 billion each into the European and Chinese currencies in the second quarter, according to a report published on late Wednesday by the Bank of Russia, which discloses the data with a six-month lag. Another $21 billion was invested in the Japanese yen.

The Chinese currency accounted for 15 percent of total holdings at the last reading, up from 5 percent at the end of the first quarter, according to the report. That puts Russia’s yuan share at about ten times the average for global central banks, with its total holdings of the currency accounting for about a quarter of world reserves in yuan, according to International Monetary Fund data.

“Russia is making a strategic shift in its reserves towards holding fewer dollars and more assets in other currencies,” said Benn Steil, director of international economics at the Council on Foreign Relations in New York.

The data reveal a dramatic acceleration in a policy Russia has been pursuing for several years of reducing exposure to assets that could be affected by U.S. restrictions. Tough sanctions on major Russian companies in early April hammered the ruble and spurred fears that more restrictions could follow, such as measures to cut Moscow off from global payment systems. Russian holdings of U.S. Treasuries dropped by about $81 billion in May and June, according to U.S. data.

Russia isn’t alone in its bid to reduce reliance on the world’s reserve currency amid increasing attempts by Washington to use economic leverage for geopolitical means. China also sold a large portion of its U.S. Treasury holdings last year amid a deepening trade war with America, and officials in Europe put forward proposals to increase the use of the euro in regional transactions.

“We aren’t ditching the dollar, the dollar is ditching us,” Russian President Vladimir Putin said in November. “The instability of dollar payments is creating a desire for many global economies to find alternative reserve currencies and create settlement systems independent of the dollar. We’re not the only ones doing it, believe me.”

The central bank data show Russia also cut the share of its reserves held in the U.S. to just 10 percent of the total from 29 percent at the end of March, suggesting some of the remaining dollar assets are now held in other countries. This aligns with data compiled by the U.S. Treasury, which shows an increase in American bond holdings in Belgium and the Cayman Islands last year.

The shift has reduced the credit quality of Russia’s reserves, with the share of AA-rated assets dropping to 27 percent from 43 percent, according to the central bank report. Yields were higher on the yuan holdings, at 3.2 percent versus 0.35 percent for dollar assets.

“In a purely economic sense, the cost benefits of a massive shift to the the yuan aren’t clear,” said Elina Ribakova, a fellow at the Bruegel think tank in Brussels. “But it makes sense if you take geopolitics into account.”

--With assistance from Paul Abelsky.

To contact the editors responsible for this story: Gregory L. White at gwhite64@bloomberg.net, Torrey Clark