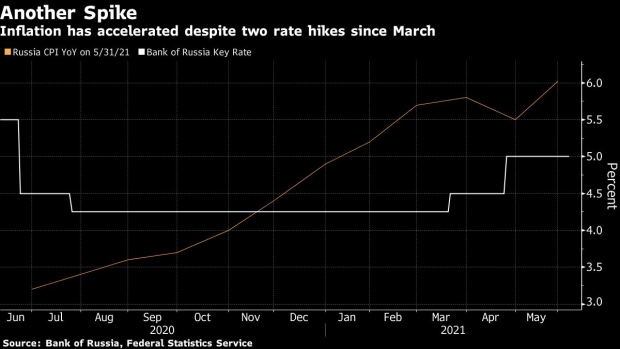 A wall mural depicting Russian General Georgy Zhukov, a World War II Soviet hero, adorns a building situated on a retail street in Moscow, Russia, on Thursday, April 15, 2021. The Biden administration is poised to impose a raft of new sanctions on Russia, including long-feared restrictions on buying new sovereign debt, in retaliation for alleged misconduct including the SolarWinds hack and efforts to disrupt the U.S. election, according to people familiar with the matter. , Bloomberg

(Bloomberg) -- Russia is on course for its second big interest-rate increase in a row on Friday after inflation accelerated at the fastest pace in more than four years.

Consumer price data for May published late last week swung the market consensus toward a 50 basis point hike and set off a rally in the ruble. Analysts at Goldman Sachs Group Inc. and BCS Global Markets said the central bank could even tighten monetary policy by as much as 75 basis points, which would be the most since 2014.

“The uncertainty has disappeared and they will go with a 50 basis-point hike as it’s very important that inflation expectations don’t run away from them,” said Lars Peter Nielsen, a money manager at Global Evolution in Kolding, Denmark. A “quite aggressive tightening cycle” is priced in, he added.

Annual inflation accelerated to 6% in May from a year ago as global food prices soared and a lack of Covid restrictions helped the economy recover from its pandemic slump at a faster pace than expected.

Governor Elvira Nabiullina said at the last policy meeting in April that a “serious, significant increase in the rate” could be necessary in the future to bring inflation under control. She said last week that the recent inflation acceleration has been driven by lasting factors and all options were on the table for today’s meeting. The central bank is focused on preventing an inflationary spiral from taking hold, she added.

Thirty out of 36 analysts in a Bloomberg survey forecast a hike of 50 basis points on Friday, while six expect a 25 basis-point increase. Traders are pricing in 72 basis points of tightening over the next three months.

“The Bank of Russia can’t afford to take any chances, with resurgent demand helping to extend the spike in inflation. Another big rate hike is probably required to bring expectations under control.”

The ruble appreciated to its strongest level against the dollar since July this week as crude prices climbed and traders factored in the likelihood of higher interest rates.

Bank of Russia needs to send “a clear message to the market that they are happy to front load tightening,” said Viktor Szabo, a fund manager at Aberdeen Asset Management in London, who has a long position on the ruble and Russian government bonds.