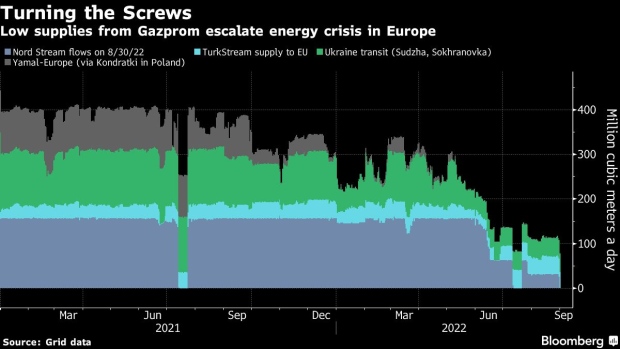 Pipework at the Radeland 2 compressor station for the European Gas Pipeline Link (EUGAL), a downstream pipeline for Nord Stream operated by Gascade Gastransport GmbH, in Radeland, Germany, on Friday, March 11, 2022. The European Union, which is dependent on Russia for about a third of its gas consumption, laid out measures this week to wean the region off Russian supplies this year but any immediate disruption would have widespread economic consequences, with soaring wholesale prices crippling industry and sending inflation even higher. Photographer: Liesa Johannssen-Koppitz/Bloomberg , Bloomberg

(Bloomberg) -- Russia looks set to resume gas supplies through a key pipeline to Europe, a relief for markets even as fears persist about more halts this winter. Prices plunged as much as 16%.

It will bring some consolation to policy makers who had feared Moscow could decide against switching the gas back on after the latest bout of maintenance. But Europe is set to remain on tenterhooks through the winter, with surging prices ravaging its economies. Germany has said it can’t count on Russian gas at all during the colder months and the government is bracing for Gazprom PJSC to call another shutdown for repairs as soon as next month.

Gazprom has said the only functioning turbine at Nord Stream’s entry point must undergo technical maintenance every 1,000 hours. That’s about every 42 days, with the next checks due in mid-October. Only one turbine is capable of pumping gas into the pipeline at the moment, without any back-up, which means the “safety of the whole system is under threat,” the Kremlin said Friday.

Shipment orders, published by the pipeline’s operator, indicate that flows are expected to restart from 2 a.m. Berlin time on Saturday at 20% of normal capacity, the same level as before the work. Orders don’t guarantee actual flows, and normally it takes time for supplies to recover to planned levels. Russian Deputy Prime Minister Alexander Novak signaled on Thursday the country is sticking to schedule, according to Tass news service.

Gazprom slashed supplies through Nord Stream in June and deepened the cut in July, shortly after the pipeline’s seasonal maintenance, citing technical issues. Flows were halted on Wednesday for checks at the only functioning turbine that helps to pump gas into the link. Normally, it uses six major turbines and two smaller ones, but this summer most of the equipment was put out of service with Gazprom citing international sanctions that disrupted maintenance and repairs.

The European Union has been preparing for disruptions. The region’s has rushed to store gas for the upcoming heating season, hitting its target two months ahead of schedule and easing any immediate threat.

Dutch front-month gas, the benchmark for Europe was 12% lower at 212.90 euros a megawatt-hour as of 12:22 a.m. in Amsterdam. They are heading for the biggest weekly loss on record. The UK equivalent fell 16%.

German power for next year declined 3.5%, reversing an earlier increase, as the European Commission hashes out measures to rein in electricity prices. They include reducing power demand and price caps on renewables, nuclear and coal.

“The response from markets is likely to be bearish as governments across Europe will be intervening directly in energy markets to bring prices down,” consultant Inspired Plc said in a note.

High gas prices are already eroding demand, with Wood Mackenzie Ltd. estimating European industry will use 16% less this year. That will help fill inventories, it said.

Lower consumption, together with higher stockpiles and supplies from alternative sources, could help offset Russia’s risks for now. But frequent Nord Stream halts would be an indicator of how far Russia is willing to go, meaning more risks this winter -- especially if it’s a cold one.

“While widespread rationing across the EU is not inevitable even in a shut-off scenario, it would be a high risk in some countries, including Germany,” Fitch Ratings said in a note Thursday. “Recession in the eurozone now appears likely as a result of the deepening gas crisis.”

It’s not yet clear when other Nord Stream turbines that are offline could be serviced. This may need to happen either on site or in Canada, where they were produced.

For the remaining unit regular maintenance is due to technical requirements provided by manufacturer Siemens, according to Gazprom. That means repeated halts if the situation with other turbines doesn’t change by October.

A spare part that could boost deliveries has been stuck in Germany after repairs in Montreal, with Moscow and Berlin arguing over which documents are needed to enable its return to Russia.

The uncertainty on future supply from Russia could extend beyond this winter. The severity of the winter and inventory levels at the end of the season, progress with setting up new liquefied natural gas terminal, and competition with Asia for LNG will determine the state of the market in the spring.

“A cold winter across the northern hemisphere would leave European inventories only 4% full by the end of winter,” Wood Mackenzie said. “Delays in new LNG import infrastructure or further disruptions to Russian flows will further curtail Europe’s ability to refill storage inventories next summer.”