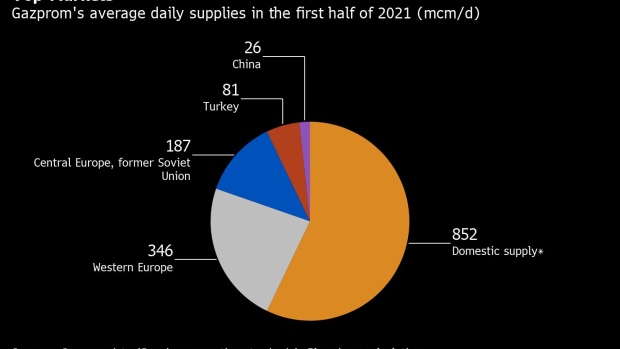 A worker inside the control room of the Gazprom PJSC gas drilling rig in the Kovyktinskoye gas field, part of the Power of Siberia gas pipeline project, near Irkutsk, Russia, on Wednesday, April 7, 2021. Built by Russian energy giant Gazprom PJSC, the pipeline runs about 3,000 kilometers (1,864 miles) from the Chayandinskoye and Kovyktinskoye gas fields in the coldest part of Siberia to Blagoveshchensk, near the Chinese border. , Bloomberg

(Bloomberg) -- Gazprom PJSC needs to store nearly as much natural gas at home to keep Russians warm this winter as it currently ships to its top customer Western Europe every day, Bloomberg calculations show.

The Russian gas giant has just two months to build its depleted inventories to the record levels it’s targeting, a goal the Energy Minister Nikolay Shulginov expects Gazprom to meet. That will require pumping into underground storages sites in Russia supplies equal to about 80% of daily exports to Western Europe.

The calculations, based on Gazprom’s data, send a worrying signal to Europe. The continent is running out of time to boost its own buffer stockpiles ahead of the heating season, with countries from the U.K. to Spain and Germany already contending with energy inflation due to soaring gas and electricity prices.

“To reach that goal, Gazprom has to prioritize discretionary supply away from Europe,” said Tomas Marzec-Manser, lead European gas analyst at ICIS.“While challenging, I’m sure it will be met.”

European gas prices are breaking records day after day even though it’s summer, when demand is usually low. The region’s inventories are at their lowest in more than a decade for this time of year after a bitter winter left storage sites depleted. Boosting reserves hasn’t been easy, with Russia limiting pipeline supply and cargoes of liquefied fuel being diverted to Asia.

Russia is Europe’s biggest supplier, but in itself a big consumer of gas. The country aims to have a record 72.6 billion cubic meters in domestic inventories by Nov. 1, almost doubled the levels at the end of June, according to Bloomberg calculations using data from Gazprom, which only releases inventory levels sporadically.

Gazprom’s output is near 10-year highs, but domestic needs also surged thanks to abnormally cold temperatures in some regions during the past winter and heat waves this summer. Exports to consumers including China and Turkey also increased 19% in the first eight months of the year.

“It makes logical sense for Gazprom to fill up domestic storage and then once complete flow more gas into Europe given the premium,” said Nick Campbell, a director at Inspired Energy.