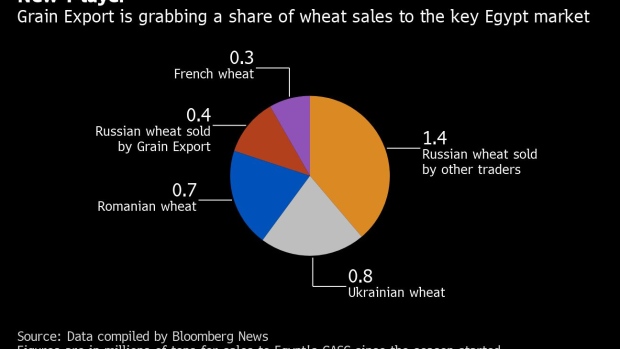 The cut stalks of harvested wheat protrude from the ground in a field during the summer harvest on a farm operated by Svetly Group, in Kamenka village, outside Rostov, Russia, on Friday, July 5, 2019. Saudi Energy Minister Khalid Al-Falih has mentioned the prospect of potential wheat imports from Russia, which has been working toward gaining access to that market. Photographer: Andrey Rudakov/Bloomberg , Bloomberg

(Bloomberg) -- A Russian state-backed grain trader is muscling its way into wheat tenders in Egypt, the world’s biggest buyer, and competing against private companies that have long dominated sales.

United Grain Co. started participating in the tenders in August through its Grain Export SA unit, and accounted for about a quarter of all Russian wheat sold to Egypt’s state buyer so far this season. That’s a challenge to other traders of Russian grain, which has almost exclusively been supplied in recent years by international merchants like Cargill Inc. or local firms such as Garant Logistic.

Grain Export said it started taking part in Egyptian tenders in a bid to expand its export business. The company has been able to offer attractive prices partly because its owner runs one of Russia’s biggest Black Sea grain terminals, which significantly reduces costs, as well as favorable financing terms.

“Competition among traders is very acute this season,” said Andrey Sizov Jr., managing director at consultant SovEcon in Moscow. “United Grain would have a much harder time selling something if they hadn’t owned part of a port terminal.”

Government-controlled United Grain bought Grain Export in 2016, and its success in the tenders is another sign of more state involvement in the grain industry. Banking conglomerate VTB Group, which is also government-backed, acquired stakes in grain terminals, rail-freight assets and a trading company in the past year, and wants Russia to help it create a domestic grain champion.

“It’s part of the changing landscape in the Russian grain-export industry,” said Alexander Korbut, vice president of the Russian Grain Union in Moscow. “These people are entering the top league while some other traders are cutting back.”

Grain Export has agreed to supply 420,000 tons through Egyptian tenders this season, and sold some of that through a partner company, according to United Grain. That’s the second-biggest amount of Russian grain sold to Egypt’s state buyer since August, data compiled by Bloomberg show.

While Russian wheat has dominated Egypt’s tenders in recent years, the share of sales so far this season has fallen to 50% from about three-quarters at a similar time last year, as other supplies become more competitive. Ukrainian, Romanian and French grain has made up the rest.

(Updates with details on Russian sales in penultimate paragraph)

To contact the reporter on this story: Anatoly Medetsky in Moscow at amedetsky@bloomberg.net

To contact the editors responsible for this story: Lynn Thomasson at lthomasson@bloomberg.net, Nicholas Larkin, Megan Durisin